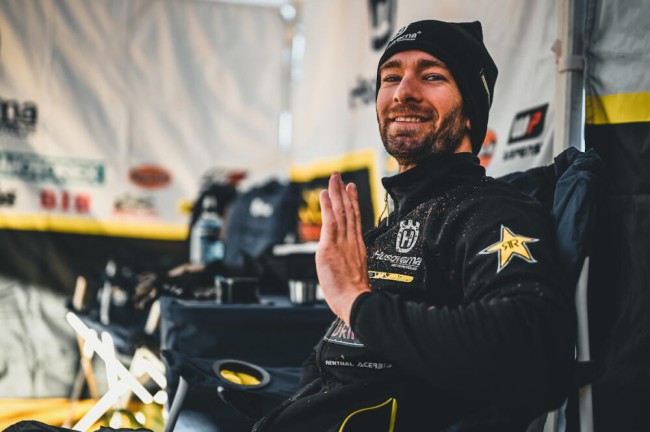 After an unforgettable season with Husqvarna Racing, star rider David Goosen has announced his retirement from competitive racing. Goosen injured his knee in the last moto of the recent Cape Town national and later discovered that it would require surgery.

The rider well-known for his “21” number board brought a breath of fresh air into a highly anticipated 2021 season for the Husqvarna Racing team. Having been a top contender for the championship title, Goosen and the team decided to give the 2022 season their best shot before the rider would gracefully end his competitive racing career.

The recent injury, however, is expected to side line Goosen from the next three rounds of the season – dashing any hope of winning the MX1 or MX2 Championship. After numerous discussions about the best way forward for both Goosen and the team, it was with heavy hearts that the decision was made for an early retirement.

“Just over a year ago we were so proud and excited to announce the signing of David as our premier athlete in MX1 and MX2. David is so much more that a top motocross rider to me, he is also a friend, a gentleman and a fine ambassador for both our team and the sport! This career ending injury is tough, really tough, and he will leave an enormous gap in many ways. We will, however, make sure we keep him around us and the sport whenever possible. It’s time for new beginnings for David and Shannon, and we are going to miss them both!” said Husqvarna South Africa’s Brand Manager Fred Fensham.

Motocross has been a part of Goosen’s life since he got his first motorcycle at 3 years old. Growing up in Zimbabwe, he fondly remembers spending weekends with his family at the track for a great portion of his childhood. As he looks back at that time in his life, he believes that it set him up for success in what would soon become a flourishing racing career.

The rider was crowned the country’s National Motocross Champion in 2017 – a defining moment in Goosen’s racing career. With immense pride in everything that rider has achieved, the team took some time to chat to Goosen about everything from his recent injury to the most memorable moments of last season:

Tell us about the extent of your recent injury?

I injured my knee in the last moto of the recent Cape Town national. While pushing at the front end of the pack I had a bit of a side swap and my knee clicked quite harshly. MRI scans showed that I had torn the meniscus in my knee. I opted to not have an operation as I wasn’t in too much pain and could continue riding.

Just over a week ago while I was training for the upcoming round, I had a very similar twisting movement on the bike which ended up causing a locked out knee and a serious amount of pain. I had no option but to undergo emergency theatre to release and fix the knee. The outcome was a 270 degree meniscus tear which had to be sewn and repaired.

How did you and the Husqvarna Racing team come to the decision to ultimately withdraw from competitive racing?

The Husqvarna Racing team and I agreed to give this year our all before I called it a day from competitive racing at the end of this 2022 season. The injury is going to set me out for the next three rounds now and it’s going to take a lot for me to come back to full fitness to be competitive again – all for the one or two rounds that will be left. I’m saddened to call it early, but with work pressures and the constant hustle it’s about time I take a break and catch up on some normal life. I feel like this is the right time that I step back and let this opportunity go to a new up and coming rider that will give their full effort and commitment to racing and Husqvarna.

What will your involvement in the sport and with the Husqvarna Racing team look like from here?

I’d love to stay involved with Husqvarna going forward – we have not gotten into discussions yet but they have an amazing motorcycle line up that I’m a very big fan of. I’ll always be a massive fan of the brand. I don’t have any plans for motocross yet, but I’ll always be a serious motocross guy. I’m pretty sure I’ll be at the track riding in a few months and enjoying the sport fully, but using it more as more as a relief than to be competitive.

What have been some of the highlights with the team over the last year?

The Husqvarna Racing team has been awesome to work and be involved with. The two year deal has unfortunately ended a bit sooner than we had hoped for. I can’t thank them enough for the times we have had together and for giving me every opportunity needed. We had some great results and some very fun days racing, which I’ll always cherish. A massive thank you to Husqvarna and Fred Fensham for all the belief and support, Grant for all the work he always put in to help, Pritchard for keeping the bikes in tip top condition, and of course Franziska for giving me the opportunity.

What has your career in racing motocross meant to you?

Racing motocross has been everything to me, I think it’s been 27 years now. I went from a small kid messing around in Zimbabwe to racing all across Europe! I have competed at the top level in South Africa for years I have reached goals I never thought was possible. It’s challenged me to the deepest of the deep over the years, but I take this as school fees and character building to my life. I have built a career in the motorcycling industry away from racing that I am excited to put extra focus into now.

How do you hope that your career has inspired the next generation of riders coming through the ranks?

I’d hope to think I’ve left a good taste in people’s mouths with the way I handled myself with racing. A lot of people have seen me through the highs and lows and I feel like I held it together pretty okay. I was as professional as possible, and I appreciated everything along the way that any person or brand ever gave me.

A very big thank you goes out to all of my sponsors and people that have supported this amazing journey – it’s been a life time of good times and special memories. I’ll look forward to returning to the gate one day with a bunch of mates to ride in MX3 or perhaps even a few laps of MX1.