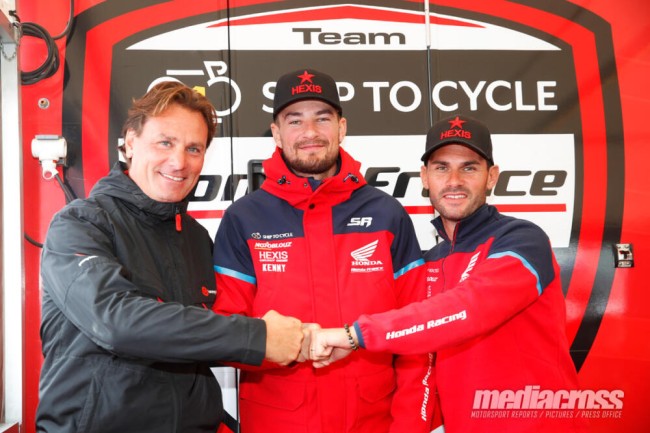 After his brilliant final season in MX2 on his 250 CRF Honda, Stephen Rubini will once again defend the colors of team Ship To Cycle Honda SR Motoblouz in 2023 for his move to the 450 class. Stephen and Josse Sallefranque will continue their fruitful association, with the collaboration of Yves Demaria.

Having celebrated his 23rd birthday earlier this year, Stephen Rubini will no longer be able to compete in this category next year at the World level and it is therefore in 450 that we will see him racing again in a few months. Author of an excellent season as he placed his Honda in the top 10 of the World MX2 – the only 250 CRF in the top 15 World – Stephen has fully achieved the goals set jointly with Josse Sallefranque and his trainer Yves Demaria, and from then it seemed logical to continue this association.

Almost a year after signing with team Ship To Cycle Honda SR Motoblouz, Stephen has just renewed his contract for the 2023 season where his main objective will be the French Elite championship, and then the Grand Prix. The French championship is particularly important for the team’s partners, and as in recent years with there was a clash of dates between France and the World Championship, the priority will therefore be France, with of course GPs on the program, depending on calendars and Stephen’s adjustment to his new category. The complete program of the team, which is also continuing its investment with Lars Van Berkel and Cyril Genot in beach races – first event on October 15-16 at Berck – will be communicated in the coming weeks.

Stephen Rubini: “Switching to 450 is an important step in a career and I wanted to do this in good conditions. My goal was to continue to work with Yves (Demaria) because I was able to see that I was progressing a lot with him, and to evolve in a structure allowing me do this move well; it was therefore important to know where I was putting my foots, and the Ship To Cycle Honda SR Motoblouz team was for me the ideal structure for that. I’m super happy to stay another year with them, as everything has gone well this season. The priority goal will be the Elite championship, and depending on my results a maximum of Grand Prix. It’s all up to me, I’m going to have to prove what I can do in 450; the first goal will be to discover the category, to learn the bike. My first race on a 450 during the final round of the French Elite at Basly went well, I enjoyed myself and I learned a lot during this weekend and with a lot of winter work I am convinced that we will be able to do great things”.

Josse Sallefranque: “Glad to continue working with Stephen with whom we had a great season, slightly exceeding our initial goals with him since he is well established in the top 10 of MX2, with some great races including a podium at Maggiora. The goal next year is to compete for the Elite MX1 title, and to have an adapted program in MXGP where the level is very high; we see a lot of young riders embarking on the World Championship without necessarily being successful. With Yves and Stephen, we preferred to go step by step, and develop this program according to its progress and its results.”