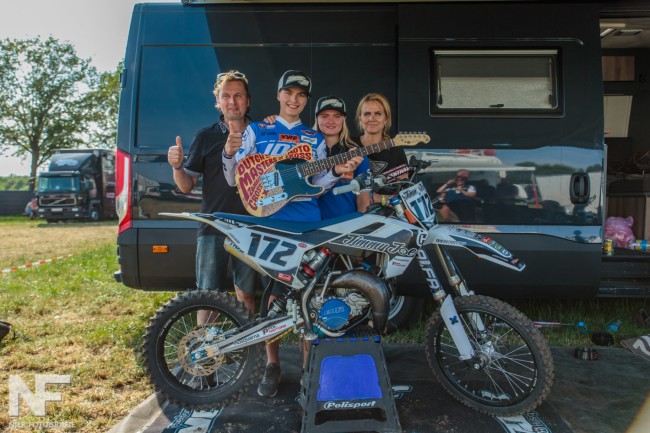 Young Dutch talent, Cas Valk will look back at the weekend with good memories after clinching the Dutch Masters 85cc title – the first title of his career.

“The races went good, I went two times second for the Championship win. I am very happy. It feels amazing to win the Dutch title. Coming into the weekend I just wanted to do my best”, Valk stated.

There’s lot of young talents in the Netherlands at the moment and  Herlings, Coldenhoff and Bogers are already racing the MXGP championship. All the young Dutch talents want to follow in their footsteps and Valk isn’t an exception. “For sure, I want to follow them and make a name for myself”, Valk commented.

Valk is quite big for the 85cc but will make the jump up the 125cc next year and he should actually suit the bike much better as he’s now the right build for it. “Last winter I put some laps in on the 125cc and that was amazing. I’m looking forward to racing it, I think it will be better for me”.

Despite winning the Dutch title, Valk contested the Junior World Championship in Arco the weekend before but didn’t really perform as expected. He’ll head to Loket this weekend though for the EMX85 championship where he’ll hope to do much better. “Arco really wasn’t my weekend, it wasn’t good. I am looking forward to Loket this weekend and I want to go for the win there. I raced Loket last year so I know what to expect”.