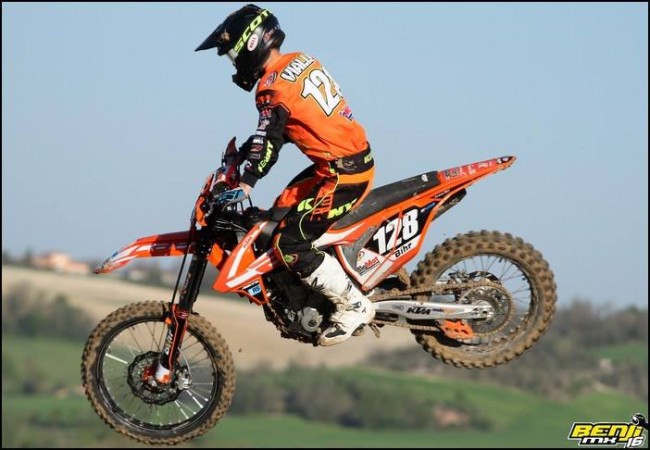 Young French talent, Tom Vialle had the opportunity of a lifetime going from pretty much a privateer setup in 2018 contesting the EMX250 series to racing the MX2 World Championship for Factory KTM this year.

Some eyebrows were raised at the time as Factory KTM usually go for a more proven rider but Vialle has already proved his doubters wrong and is having a superb rookie season.

The French rider currently sits third in the MX2 World Championship and will want to hold onto that position until the end of the season.

We caught up Vialle after the final Dutch Masters round to discuss his season and much more.

Gatedrop: Tom, that’s a wrap on the Dutch Masters series, overall a solid day for you. Can you talk me through your moto’s?

Vialle:  Yeah, it wasn’t so bad, a pretty good day. The start was difficult, I started two times fourth or fifth. The first race was very intense with Sterry and Vlaanderen. I ended up fifth. In the second race, the first two laps were difficult for me. After that I went with them and could come back to catch Sterry, maybe if I had another lap I’d have passed him but anyway it was a good weekend for me, I’m happy.

Gatedrop: In the past the sand was maybe your weakness, how did you find the track today and are you happy with your progression in the sand?

Vialle: Today, the track was flat for the races and not very bumpy.  It’s the same for everybody. I am happy with the progress I’ve made in the sand and I feel good for Lommel.

Gatedrop: In the MX2 World Championship, are you surprised with the results and what were your goals coming into the season?

Vialle: The World Championship has been going good for me. The past three races have been very very good. I started real good and I followed Jorge (Prado) every race. It’s good for me.

Gatedrop: Last year you were pretty much a privateer and this year you’re a factory rider. How does that feel and to get such a big opportunity?

Vialle: It’s very good. I work a lot with Joel Smets and all the team with the mechanic. It’s a big step for me but I’m really happy.

Gatedrop: There were question marks when KTM signed you but I think you’ve already proved the doubters wrong. Does it feel good to prove people wrong?

Vialle: Yeah, also for me it’s good to sign with KTM for the next two years. The pressure, it’s good now and with the results I’m having, it’s looking good for next year.

Gatedrop: In what area’s does Joel Smets help you?

Vialle:  Joel helps me a lot. Every day on the training whether it’s cycling, running, on the bike. It’s very good to have Joel with me.

Gatedrop: Dylan Ferrandis has recently stated he won’t race the Motocross Des Nations for France. Obviously we have to wait for the team but there’s a chance you’ll get selected. How would it feel to represent your country at Assen?

Vialle: Of course, Dylan Ferrandis won’t come for the Motocross of Nations.  I’m not sure when exactly, maybe one month when the French Federation select the team. For me, it would be my first time but I’d be happy, it interests me.