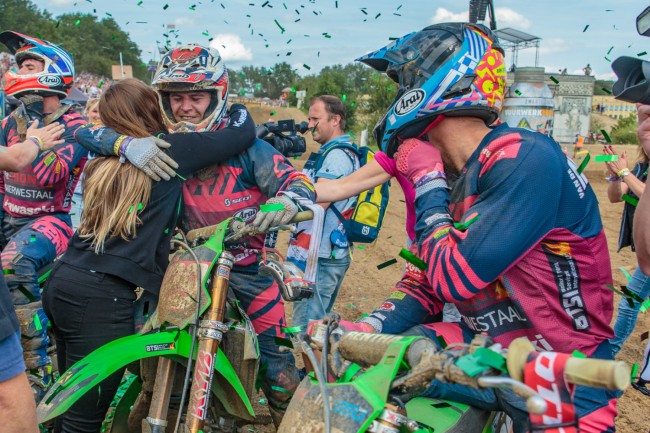 It was a great weekend for Henry Jacobi as he clinched the 250cc Dutch Masters title. The German rides for the Dutch based, F&H Racing team and it was their first title.

Jacobi is also having a good season in the MX2 World Championship as he sits fifth in the championship but he’s eager to get back into the top three after a great start to his season.

After clinching the Dutch championship, we caught up with Jacobi about a range of topics.

Gatedrop: Henry, riding wise it maybe wasn’t the best day for you but the end goal was the championship and you delivered..

Henry Jacobi: Yeah, the riding you can say wasn’t good. It started from this morning, it’s a one day event and you only get five minutes free practice before timed practice. I’ve never rode here before except for the Masters five years ago or something. I didn’t know the track that well which didn’t help. Everyone done their fast time at the beginning and I did it on the ninth lap which wasn’t really good with the tenth gate pick.

In the first race I started around tenth and then made it up to sixth but everyone was gone at the front already. I had some technical issues and the engine almost broke I think. I kept it going a little bit to get some points. I had three points going into the last race and I knew I need to be in front of him (Geerts) or at least with him.

I saw he got the holeshot and yeah, I said to my myself I needed to go wide open. I was eighth and got back to Sterry and Vlaanderen. I saw Roan pass Geerts, I was really right there. I needed maybe one or two laps to pass Vlaanderen and Sterry to get to him but then his bike broke and at this moment I knew I was champion so I slowed down and kind of just enjoyed the race – the atmosphere and the whole Zwartecross. I could enjoy it all even without being so fast on the track.

Gatedrop: Obviously you ride for F&H Kawasaki which is a Dutch team so they must be pleased you’ve given them the title!

Henry Jacobi: It’s very important for the team I guess. I do think that they like this very much because it’s the first they’ve ever got and it feels great that my name delivers this to the team. They’re Dutch so it’s special for them also.

Gatedrop: What’s your thoughts on the event and running a festival with a motocross race? I think it’s good for the sport but on the other hand the track isn’t the greatest.

Henry Jacobi:  The only thing is that the track is not really in shape with the big trucks and bikes going over it and everything. Overall it’s a great event for the sport. It’s good, people get to know motocross more because there’s like 200,000 people here and they can watch it if they want. Overall, I think it’s a good event.

Gatedrop: Just on the GP’s, your season I feel like started really well and even up until Germany was going good but then Indonesia wasn’t so good but overall are you happy with how it’s going?

Henry Jacobi: I still need to say that overall I am happy with the season but I started a little bit more fired up. Now I feel like I need too switch some buttons again to get the fight going for third place in the World Championship. It’s not over yet, overall I’m having quite a good season.

Gatedrop: How’s everything with the team after the incident in Germany? You obviously made a mistake and apologised, has everyone drawn a line under it now?

Henry Jacobi: Yeah, I think so. It’s fine from me and everyone elses side. I did that mistake, you can do it once but not a second time. I did it once and hopefully I can hold myself in the next time a little bit more.

Gatedrop: Just on the rest of the season, what are your goals? I guess you want another podium!

Henry Jacobi: The goal is to get into the top three in the championship again but it’s very difficult with Vialle getting better each weekend and Geerts is also stronger now with the sand races. Let’s see, I hope that I can also be there.

Gatedrop: Assen is a track you always seem to be good at and Germany could have a strong team if Nagl is fit for it and Roczen comes over. How would it feel to get picked to represent your country in Assen?

Henry Jacobi: Yeah, I think so but let’s see the team selection. I’m not sure if Nagl is coming and I’m also not sure about our star in the team.  It depends on his results in the AMA’s, if he feels confident about coming then he will come. A lot of USA riders, like Ferrandis aren’t coming. The AMA guys don’t want to come and get beaten at the Assen track from Europe guys they don’t even know about so let’s wait and see. I will go for my MX2 class, I will try to make the best result for Germany and the MX2 result.