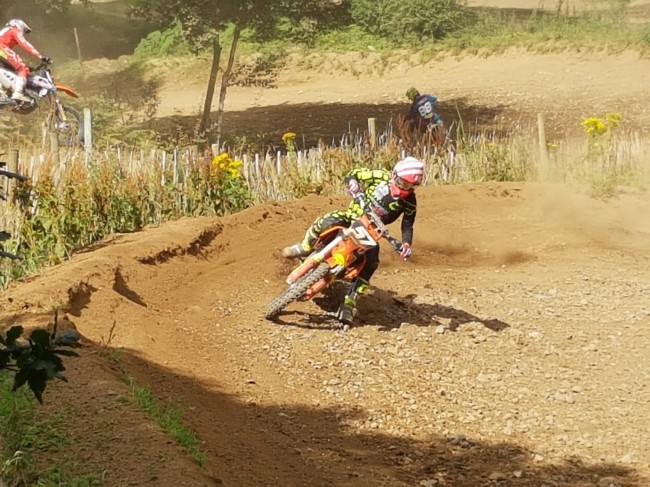 Minimum fuss and maximum speed guided the quiet but determined Richard Bird and his Norman Watt/Suitor Autofix/ Five5 motorsport KTM to yet another championship as he clinched the 2017 MX1 Ulster championship with three wins from three at Tinker Hill.

Bird had a tough race-long battle with Sean Devlin on a very slick track in race one but came out on top and did the same in race two before controlling race three despite Jordan Scott’s best efforts to keep the champ in sight.

Bird is simply very tough to beat these days, he puts in lap after lap with no mistakes and has the speed to go with the consistency. The Ryan Dungey of Ulster motocross, Bird always finding a way to improve and makes the best decisions on track during the year to minimise the mistakes while maintaining his speed.

We caught up with the champ after this title winning day at Tinker Hill to get his thoughts on the season.

A perfect day with the overall win and clinching the championship!

It’s good to get it with a round to go, it’s just a pity some of the boys got hurt at the start of the year but that’s the way it goes sometimes, it’s a tough aul sport! But no it’s definitely good. It was tough out there today it was just about getting away at the start and trying to keep it upright.

You had a good battle with Sean Devlin in the first couple of motos?

Yeah the first race me and and Sean had a good battle, he got the start and was riding really well, I was trying to pass everywhere but it was very one-lined today. I saw he made a wee mistake and I just went for it and pulled a gap, so it was good to get the win there.

Just looking back at the season how do you sum it up, you have been in control of the championship and beaten Neville Bradshaw and even Stuart Edmonds at times, you have been riding well…

Yeah it’s been another good year, I have some good races and it has been fun. I don’t have many years left so I have to enjoy it while I can at the minute! And it’s definitely good to get another championship.

Does winning make you want to do another year?

I don’t really look at it like that, as long as I am enjoying it I want to keep riding, I am still having fun. There are still a couple of races to go this season so we will see how it goes and then think about next year.

You are a dad, how are you combining that and racing?!

It definitely changes things so it does! But I wouldn’t change it for the world, it’s great. They are with me every weekend at the races and it’s fun.