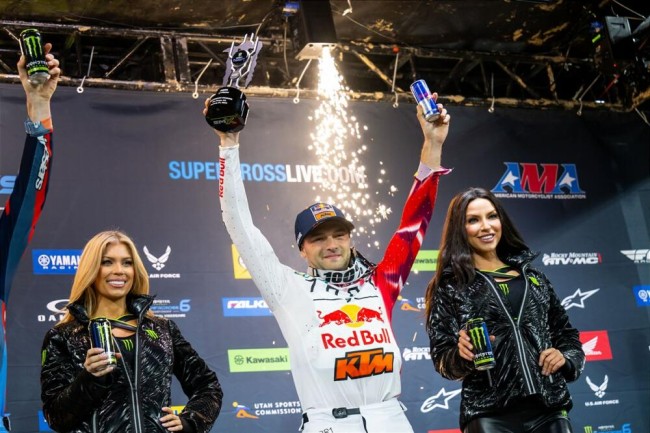 Webb qualified third fastest on combined times during the afternoon and carried that form to earn fifth place in his Heat, but it was the Main Event where he brought it all together in the second stop of the new SuperMotocross World Championship. The 27-year-old made a strong start into P2 during the early laps, before making his way into the lead by the end of lap four. He was bumped back a place on the following lap and that’s where he would remain, with second repeating his result from Anaheim’s opener two weeks prior.

Cooper Webb: “Tonight was good, I got off the start strong and that was key in the way the track developed. I was able to lead some laps, which was cool, but the pace was pretty strong and I made a few mistakes in the middle of the race. The lapped riders helped me in the end to edge closer to Eli [Tomac] and it was pretty hectic with all that going on, so it was a tight finish, but overall I’m happy with how the season has started and am looking to push forward from here. It was positive for me to see what it takes to win at this point of the year, being so close tonight, so we’ll learn from the few mistakes and keep fighting on.”

Also equipped with the KTM 450 SX-F FACTORY EDITION, Plessinger only managed to qualify in 14th, before quickly turning that around in his Heat race for sixth position despite being caught up in an early incident. The opening lap of the Main Event saw him positioned outside of the top 15 in the early stages, however, he put his head down and made a series of critical passes from there. In the end, Plessinger made his way into ninth place to take home important championship points two rounds into the new season.

Aaron Plessinger: “San Diego was a challenging day for me, even if the result was close to round one. Although practice didn’t go as planned, I was riding good in the Heat race, got a pretty good start, and then got caught up in a crash that I couldn’t avoid, so came from dead last to sixth in that. In the Main Event, I got a horrible start and worked my way back to ninth, which is not what we wanted, but we’ll get better as we go. I have to focus on starts this week and come out swinging when we head back to Anaheim.”

The third of Red Bull KTM Factory Racing’s regular 450SX contenders, Marvin Musquin, was ruled out of the San Diego round following an untimely mid-week practice crash that resulted in a wrist injury.

Unfortunately for Red Bull KTM Factory Racing 250SX West rider Maximus Vohland, mishaps in both his Heat race and the Last Chance Qualifier meant he was unable to transfer through to the Main Event. Vohland qualified in eighth position during the afternoon, before a first turn incident upon the restarted first Heat saw him cross the line in 13th place. From there, he recovered from a poor start in the LCQ to make his way into a transfer position, only to go down in the final laps and finish in P8 onboard the KTM 250 SX-F FACTORY EDITION. Now 12th in the point standings, Vohland will look to return stronger next weekend at Anaheim 2.

Maximus Vohland: “Timed qualifying went well, being inside the top eight. In the first Heat race I had a very bad start, made my way up to sixth, and then the red flag came out. On the restart I crashed in the first turn and, with only two laps to go, I was outside of the top nine and had to go to the LCQ. In the last chance, I worked my way up to a qualifying position, but then made a mistake on the last lap and went down, unfortunately putting me out of the main. Of course, I’m very disappointed, but I’m healthy and will be back at A2″