Jett Lawrence on his win: Definitely meant a lot! 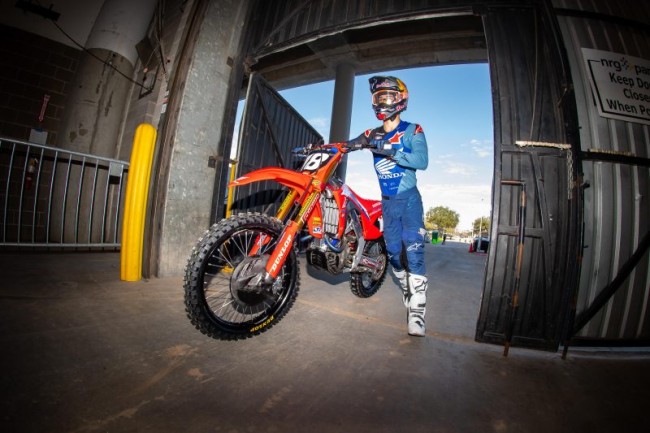 Jett Lawerence spoke to the media about his impressive first ever supercross win that saw him dominate his rivals with apparent ease as the off-season hype came to fruition in style.

A rider who most Americans hadn’t even heard of despite his results through the ranks in EMX has within two years of being in the States, become the future star of US. It’s been a rapid rise for the aptly named Jett!

Lawrence however, despite some big talk in the off-season, said he has tried to stay away from all the noise around him. “I’ve kind of tried to keep away from that because obviously it can blow your head up pretty big,” admitted the 17 year old. “Obviously when you don’t do what they expect you to, it can mess with you mentally a bit. I’ve known I’ve kind of had it in me for a while, but it’s just like they say. “When is it going to happen? Is the night going to all click together” and that stuff? And tonight, was just that night.”

On the win Lawrence said it was a relief to finally get it “It’s definitely good to get this first win out. I think I’m third in the championship now, which is good from going from sixth in the first round. I think I’m four points off or something. It’s really good to get this first win out of the way because now obviously they always say the first win is the hardest one to get, and now the rest are definitely not easy but they’re definitely going to be not as hard as that first one, not as much of a long wait. It’s really cool. This one was special because obviously A2 was 366 days ago, so it was really cool to kind of do it around the same time as there. It definitely meant a lot.”

And he admitted he made some minor bike changes from Saturday to Tuesday to help make him more comfortable on the track: “On last Saturday, the bike setting was still not there. The rear was really overpowering the front and we made a few changes today. We were still kind of changing the clickers until the last practice and ended up finding the right setting. When they bring the red flag out, from there I just felt like I was just at the practice track. Felt like I was flowing really good. Obviously to get the heat race win, obviously that changes your mental a lot more than it would just getting a second or third. I came in with the same mental as Saturday. Just confident in my setting on the bike. It’s just the same, old me. Nothing has really changed. I really gelled with the track today and just clicked off my laps.”

On factory Honda at just 17 years old, Jett Lawrence is justifying the hype and investment already and the pathway is now there for the Aussie to be next big superstar in America.