A quick chat with: Jeffrey Herlings – mud is one of my weak points! 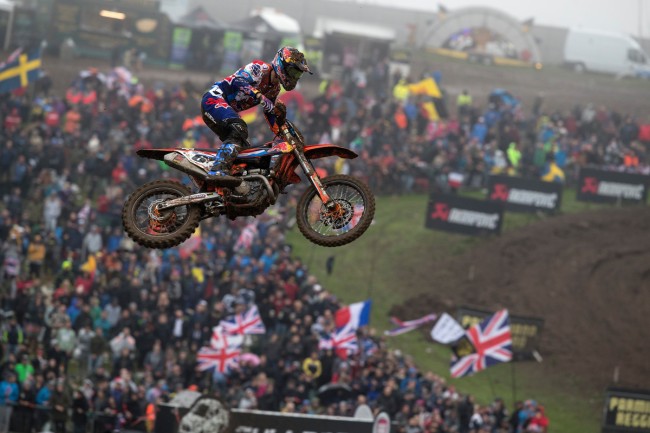 We caught up with a visibly frustrated Jeffrey Herlings who was disappointed that Holland didn’t win the overall and that he just came up short in the final moto!

But it is that desire and hatred of losing that saw Herlings be so dominant at the end of the season once he got his fitness back from that early season injury, and the Dutchman wants to come out swinging next season!

Jeffrey, despite his disappointment, was gracious enough to give us a couple of minutes of his time to talk about his day and his rivalry with Cairoli going into next season.

Just on your season overall, you were right on form from midway on was it frustrating not to be there at the start of the year?

The start of season was really disappointing, we were far off but the second half of the season we were one of the best and really consistent and had a good pace.

I won five out of the last six GPs, won my class at the Nations and won in the US so I won a lot in the last couple of races and I have a lot of confidence. I am going to have some time off and then regroup for next year. I hope to start of next season with this pace and hopefully go for the championship.

Was it good for you to win in America to get the respect there to show them how good you are?

Yeah we only decided to do it five days before but it was good to win. It was good for the European industry as well!

Herlings puts on the style during a dry Saturday. Pic: KTM/Ray Archer

Just on today, you were going well in the mud but Anstie just held you off at the end there!

Yeah I couldn’t really find the lines to pass, he had some great lines and I couldn’t find a place to pass. He did really well, he got the holeshot and had clean vision while I was buried with mud but anyway he did a good job. He is good in the mud and was good in France, the mud is one of my weak points but for a weak point I still did good.

I think the same story! We both want to win and he is one of the guys to beat for the championship because he is really consistent, he is good on each track and good in the championship. It’s going to be tough because we are riding for the same team, the same manufacturer but at the end of the day we have a lot of respect for each other. We don’t want to make each other injured but we do want to race for the win!