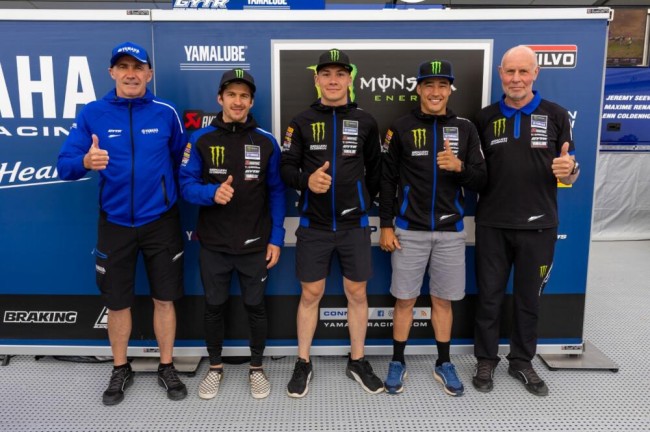 Yamaha Motor Europe is pleased to announce that Jeremy Seewer, Maxime Renaux and Glenn Coldenhoff will remain with the Monster Energy Yamaha Factory MXGP team in 2023, racing the premier class of the FIM Motocross World Championship, with all three riders targeting the MXGP crown aboard the Factory YZ450FM.

Filling three of the top-five places in the 2022 MXGP World Championship standings, Seewer, Renaux and Coldenhoff put in some outstanding performances this year, with their combined total of 22 podium finishes ensuring that Yamaha secured the manufacturer’s championship title in MXGP for the first time since 2015.

Last year’s MX2 World Champion, Renaux, was impressive in his debut season in MXGP. The 22-year-old quickly adapted to the YZ450FM and took the fight to even the most experienced 450cc riders. Finishing the season as the best-placed rookie, the young Frenchman celebrated four qualifying race wins, six championship race wins, seven podium finishes, of which one was a Grand Prix victory, on his way to a creditable fourth in the world ranking.

Coldenhoff enjoyed a positive second term with Yamaha in which he made encouraging progress. The ‘259’ took his YZ450FM to three race wins, a Grand Prix win and a further five podium finishes to round out the top-five in 2022.

Jeremy Seewer
Monster Energy Yamaha Factory MXGP rider
“It’s great to stay with the same teammates in 2023. I signed my contract for 2023 quite a while ago, so I knew I would be here, but it’s nice to grow together. I started with Yamaha in 2018 and I will be on blue in ’23, so it’s my sixth year. It’s nice to have familiarity, and we have a lot of exciting things ahead of us, so I am looking forward to seeing what we can do.”

Maxime Renaux
Monster Energy Yamaha Factory MXGP rider
“It’s good to know we will have a strong team again. I signed a two-year deal in 2021, which was good to have two years to build in MXGP. We already started quite well this season, so I am happy with the progress I have made in my move to the YZ450FM, and thankful that Yamaha has supported me fully in my decision to step up. We will be ready to go in 2023 where the goal will be to keep building in confidence and experience, so I am really looking forward to it.”

Glenn Coldenhoff
Monster Energy Yamaha Factory MXGP rider
“I’m really happy. I’ve been with Yamaha for two years, and this season, I feel like we have made some big improvements. I am looking forward to keeping the same group of people around me. We have built such a strong relationship in a short time, and they have always stood behind me, so I really appreciate that. I like the set-up and the people we have around us from the osteopath to the trainer, all these things contribute something, and I think this is important. Here, I have everything I need, and we have some even better things coming, so I look forward to it, and I am ready to go for it again next year.”

Alexandre Kowalski
Yamaha Motor Europe Off-Road Racing Manager
“We’re really pleased to continue with Jeremy, Glenn and Maxime for at least another season. These three riders have all demonstrated their ability to fight for race wins and the title with the multiple podiums and victories we have had this year. In addition, all three finished inside the top five in the championship this season, which shows great consistency, and this is also important, as consistency is the key to success in any form of motorsport. Jeremy and Maxime have been with Yamaha for many years and have both been fundamental factors in Yamaha’s success. They are key members of the Yamaha Family and we’re extremely happy to continue the story with them along with Glenn, our newest rider and one that has made great progress aboard the YZ450FM this season. We are confident in this line-up, and while we are still fully focused on finishing the 2022 season strong at the Motocross of Nations in the USA, we are proud to know we will have the same strong team in place for 2023.”

Louis Vosters
Monster Energy Yamaha Factory MXGP Team Owner
“I’m really happy with this strong line up. When we look at the results from this year with these three riders, we are there fighting for the win every weekend. We have had 22 podiums; five GP wins and all three riders finished inside the top five in the championship. I am happy that we can continue building on these results with the three strong riders we have.”