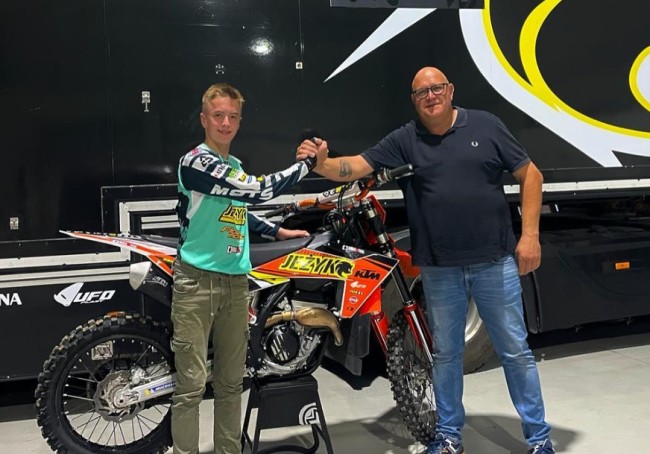 Jezyk Racing Team have confirmed they have signed up young French talent, Tom Brunet for the 2023 season. Brunet was a rookie in the EMX125 series this year and will stay in the class for the season ahead hoping to be a front runner.

The young French rider spent the season with the VRT KTM team but will now be part of Spanish based team, Jezyk Racing.

“Jezyk Racing Team continues with its commitment to young promises and today makes official the signing of Tom Brunet the 2023 season. The young French rider will compete in the 125 European Championship, while fighting for the title in the French National and will also compete in several races of the Spanish Motocross Championship when the schedule allows”.

Brunet has had his first year in the EMX125 in 2022, so he will arrive next year prepared to be among the top positions in the class.  With his arrival, the Jezyk Racing Team already has two confirmed riders for next season, a few weeks ago the continuation of Mauro Osinalde was confirmed, who has already made the leap to the 250cc machine”, the team stated on social media.

“I’m pretty happy with my 2022 season” commented Brunet. “I finished sixth in the French championship with good starts, I made holeshots and top 5 in the rounds. The goal was to get into the top 10, so it was a good championship for me. In Europe, it was a bit more complicated because there were some races where I didn’t manage to qualify but I still retain a lot of positive points with again very good starts in some races, very good results in the heats such as a 13th place in Spain, or a sixth place in Ernée with also good places in the qualifications. I am satisfied with my season on this championship, it allowed me to gain experience for next year and it will be important. I thank my sponsors, the VRT team who helped me a lot this year, as well as my parents & Pierre-Alexandre Renet who was my coach this season.”

“Regarding my goals, I would like to enter the top 10 of the European championship and the top 3 on the French championship. My arrival in the French team will allow me to do training sessions during the winter with the national coach, which will be good for me. They will also be present on the European events and will supervise a lot of things, so it’s really good for me. There will be the 85 riders and the bigger ones in 250, it’s a really nice team and we all get along very well. It will be very interesting to be able to train together this winter”, Brunet concluded.