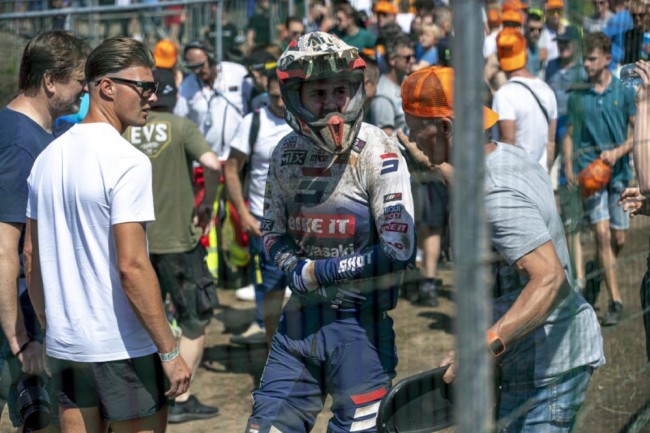 The team looked forward to Holland, Taylor and Wilson went out early to Belgium with our Belgian mechanic George, both riders were feeling positive coming into the weekend. Our main mechanic Jordan was out with COVID, so our young mechanic Adam was mechanic for Taylor and team manager Steve Dixon stepped in for Wilson.

Qualifying went well for Wilson, he qualified 9th, but if he had put his best sectors together would have easily been top 5, so this gave a good indication for the weekend. Taylor qualified in 23rd.

In Race 1, Wilson came through from the start in about 4th, although this top 5 position was short-lived, perhaps due to lack of intensity experience over the last month since the surgery. He dropped back to around 7th. Sticking with the front guys for the rest of the race, he managed to finish in 6th. Taylor started in around 18th, and then a small crash, but then came through to 16th. After another small mistake dropping back to 27th, then a small bit of plastic got wedged into the wheel, temporarily causing the brakes to not work properly. He crashed through the spectator barrier, dislocated his wrist, and sustained a broken arm, which realistically has put Taylor out for a good 8 weeks.

Race 2, another good start for Wilson coming through in the top 10. He went to make a pass for 7th but had a small crash, but due to the location came off the circuit and lost a large amount of time trying to get back onto the circuit. He eventually finished in 12th position, which combined from the 6th from the first race would give him 9th overall, just a few points shy of the top 5. Had he not had the small mistake in race two this was a real possibility. We now head to Loket, also for round 1 of the Women’s World Championship. Courtney is currently in Belgium practicing with George, and will head to Loket this weekend.

“Going back on the tools after many years was a bit of a change, two weeks ago I was running a GP and now I’m here running the T bars for Wilson Todd. The last time I was here was 1991 I think! It was good to be back here and also get a better understanding of how things work for the mechanics. With Jordan out over the last week we’ve had to pull together to get the job done, Wilson looked really good and the potential is really coming through. It was so unfortunate for Taylor for his incident. On the bad side, Taylors out, unfortunately, it’s part of the sport. But on the good side, Taylor’s showed enough skill and commitment, and professionalism that I’m still excited about the end of this year and next year. In just these 4 GP’s he’s improved so much. I know in his mind he’ll be preparing for next year. We come away disappointed about what’s happened but we’re all positive about the future, and he has the knowledge the team is behind him for his return and a speedy recovery, and the next two years. The 2021 Kawasaki is a solid base, we’re still running a stock engine with other alterations, we’re getting good starts and finishes at the highest level, which is a real testament to the bike. Unfortunately to get the bike to that next level above what Kawasaki has provided requires a big overhaul, and with COVID delays etc this takes time. We don’t feel at a disadvantage, Kawasaki has made huge steps over the past few years with the standard bike. The truck has headed to Loket, the home country of our exhaust sponsor DVR, so it will be good to have them at the races this weekend.”

“This weekend was definitely an improvement, 6-12 for 9th overall. I dropped it early in moto 2 trying to get a pass, which hurt the overall position. I feel like I’m settling into the class well, but I’m missing that extra fitness — raising the intensity to make the passes.”

“Obviously pretty devastated with this weekend, definitely not the outcome I wanted. Unfortunately, I have a broken arm and dislocated wrist from Sunday. I’m gutted as I felt like I was doing well this year and showed some good results. Hopefully, I’ll be back to do some of the last few GP’s this year but going to take the time needed to fully recover and get back into it for the rest of the year but mainly focus on 2022.”