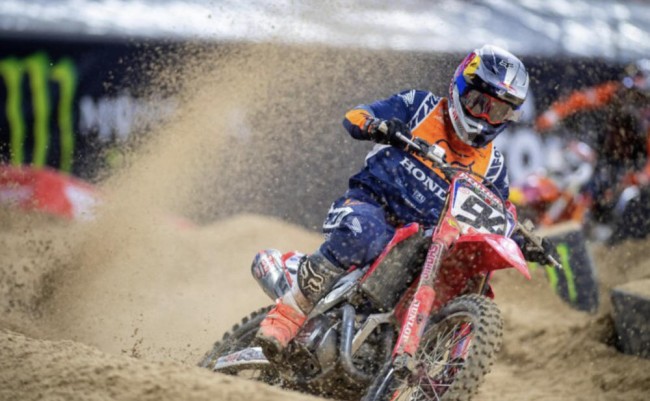 Ken Roczen: The German has had two unlucky races in a row that have cost him eight points, something that could prove crucial at the end of the championship, but there is no denying how good Roczen looks on the new Honda.

He has had good results in every race this season and done it in every way possible. At round one he had a decent start but made quick moves to get into second, in round two he came from outside the top 15 through the pack to fifth – and it could easily have been third and around three he passed Webb and was mistake free all race in the lead until Wilson got in the way to wreck what should have been a win for Roczen.

Despite all the adversity he still has the red plate through consistency despite his problems and you have to think the win that has eluded him so far is coming soon. Roczen looks smooth and in control at every round so far. and deserves the red plate because all in all he has been the best rider after three rounds of the season.

Cooper Webb: It doesn’t matter how bad things get for Cooper Webb he just has an amazing ability to will his way thought it. His mental strength and determination to dig in and and force a result that on form and raw speed isn’t there but he can still make it happen and very, very few riders can do it.

After a bad round one, Webb’s speed still wasn’t there in round two but he forced himself into fourth, passing title rival Roczen near the end. Then kept Roczen in sight at round three despite getting passed by the German early. Once again, Webb refused to give in and when Wilson blocked Roczen, Webb was right there and didn’t need a second invitation to make the pass and now he is only one point behind leader Roczen even after what wasn’t the most impressing opening coupe of rounds for the former champ. Webb admitted he struggled with the bike set-up in Houston as well as some enforced rest in December due to aggravating his back injury, but that looks to be behind him now and Webb with confidence is going to be very dangerous from now on! This guy is a mentality monster.

Justin Barcia: The results on paper at the last two rounds haven’t been impressive on paper but it doesn’t show how well Justin Barcia is riding. So far the Gas Gas rider looks superb on the bike, a broken shifter stopped his impressive charge through the field at round one and a crash at round three stopped him getting involved with Webb and Roczen at the front – but he was flying and had caught the front three until he went down.

Then he got back up and immediately passed Eli Tomac back with authority flinging the bike about like it’s a toy. Barcia looks totally at home on the Gas gas and his pre-season confidence wasn’t just talk, he loves this bike and clearly believes this is his best shot at the supercross title. Barcia looks to be in this for the long haul in 2021

Colt Nicholls: I have to be honest, I hadn’t thought of Colt Nicholls as a title contender this season. A race winner? Yes, but I wasn’t sure he had the consistency and mental strength to win and challenge week-in, week-out but after three round it looks like Nicholls is here to stay.

His stalking of Craig then waiting until the end was impressive – especially wince he had to pass him twice. Nicholls then eased away to win by two seconds and asserted himself there and then as a title contender. Nicholls has always had speed in supercross and even upped his game outdoors but it has been flashes of brilliance more than sustained speed and consistency. Now healthy and confidence and with more than a sniff at this title it looks like there is a three-way battle for the championship with Craig, Lawrence and Nicholls and with Hampshire and Forkner now out it could be fine margins that win this title with all three a level ahead of the rest of the competition.