Colt Nicholls – I kind of knew I would be forgotten about 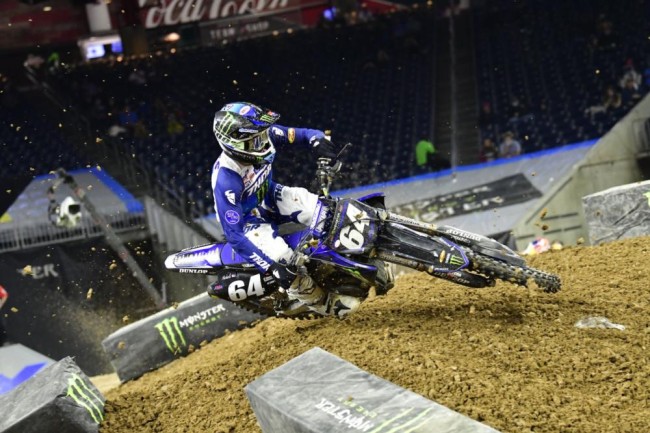 Colt Nicholls has had three impressive races at Houston and the week ended in style with a brilliant win at H3 to go joint top for the championship.

The Star Racing Yamaha man, who didn’t have much pre-season hype coming into the year, is proving a lot of people wrong right now. This is what he had to say in the press conference about his night and being the forgotten man coming into the 250 East coast season.

I don’t really think most of us are looking forward to that, but something we’re definitely going to have to face with a handful of guys out and some younger guys kind of filling the slot. It made it tough, for sure. It was tough on I’m sure Christian coming up on them first and trying to navigate where to go. I was just kind of going where he wasn’t. It was tough. It felt like we hit lappers really early. I don’t know what lap we hit them, but it was a little bit of chaos, especially in the heat race. I went down and had to come through the pack and it’s a little scary back there. Just tried to play it smart and glad I was able to do that tonight.

Me and Christian were kind of just trading laps. I noticed we were doing a lot of similar things. I’d pick up on a few of his lines and kind of saw where I was just a little bit quicker. I really just tried to wait my time. I think the lappers maybe helped a little bit, closed up a little and stuff like that. I just tried to be smart and really just pick my battles. I feel like I did that really well. I was able to just close in on him, I just wanted to keep going and keep going. He got back by me and I kind of just kept trying to apply the pressure. It just made it a fun race, it was really cool. Like I said, it felt like another day at Yamaha with me and him kind of just trading laps. It was fun. I’m glad we got off to a good start like that, and I was able to come through in the end. It was nice.

Being overlooked in pre-season

Maybe a little bit, but overall no. I knew what I was doing in the off-season, just trying to put in time really. I was actually able to do that this year for the first time, really. Two thousand nineteen I had a good off-season. I was able to have a good series. I kind of learned a lot from that season, having the red plate for a while. I ended up missing a race. It was a good season for me, though. I actually learned a lot and I was actually able to come in prepared for the first time in my career. I was able to do that this year, too. I knew if I just stayed healthy and was able to put my head down I would be good. It’s just kind of tough when you’re not there. Last year we only raced I think three or four races all season, supercross and outdoors combined. So I kind of knew I would be forgotten about, in a sense. So it didn’t really bother me. I understood why people weren’t really putting me at the top of their fantasy picks. But I believe in my ability and know what I can do if I can come in and get a good start and come in healthy and I was able to do that this year. It feels good. Three-two-one in Houston, I can’t really complain, so move onto Indy and try to keep it moving.

I think a win always kind of gives you a little bit of a boost, just kind of proving to yourself that you actually can win, so it’s just a good feeling. I was happy with where I was, three, two on the first two races. I felt like I was riding well, just wasn’t putting myself in a great position off the start on the first two races. I was able to do that tonight and kind of hunt Christian around the whole main, and we were just kind of trading laps. So it does give me a little boost, it feels great. We’ll be sharing the red plate, which will be kind of cool for the team going into Indy, so I’m looking forward to it.