Webb, Musquin and Vohland on Houston 2 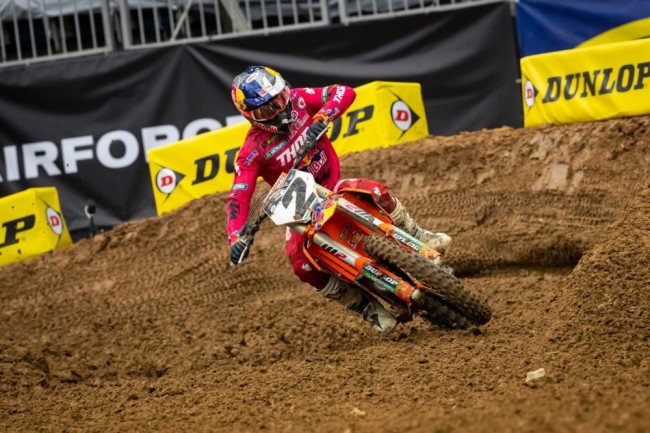 HOUSTON – Just three days after an exciting season opener in Houston, Texas, the Red Bull KTM Factory Racing Team returned to action inside NRG Stadium on Tuesday for Round 2 of the 2021 AMA Supercross Championship. The racing was intense in the 450SX division as track conditions kept riders on their toes in addition to a stacked field of competition in the premier class.

Cooper Webb had a slow start to the night but he finished strong just off the podium in fourth, while Marvin Musquin fought hard to salvage a sixth-place finish after going down in the Main Event.  Webb worked his way through the morning’s qualifying sessions, making small changes to his bike setup along the way. In 450SX Heat 2, he powered his KTM 450 SX-F FACTORY EDITION to a great jump off the line but he got cut off early on the opening lap, where he began in eighth. He quickly worked his way up to sixth, securing a decent transfer into the main. In the Main Event, Webb got off to an eighth-place start and climbed his way through the pack. With three laps to go, Webb put on a charge that would see him make the jump from sixth to ultimately finish fourth.

Webb:“It was a bit of an up-and-down night. I was still trying to find a really good setting for me that I liked and I kind of struggled throughout the day. I didn’t have a great start in the main but at the end I really started going. I made some late passes, got a few gifts and ended up fourth. It’s not what we want but it’s still early in the points and we’ll rebound. There’s still room for improvement to get me more comfortable on the bike and with that I think this week we’ll be right there where we need to be.”

In 450SX Heat 1, Musquin got off to an incredible start but the race was quickly re-started due to downed riders in the first turn. Upon the re-start, Musquin grabbed another solid start to position his KTM 450 SX-F FACTORY EDITION into second on the opening lap. He battled inside the top-two for the first six laps but he found himself in third with about four laps to go, ultimately finishing third in the heat. In the Main Event, Musquin got off to a good start as he raced his way up to fourth by lap seven. He set his sights on the podium battle ahead and while making up solid ground, Musquin ended up washing the front end in the sand section and dropped back to 10th. He re-mounted and quickly put on a charge to ultimately climb up to a sixth-place finish in the Main Event.

Musquin:“I got a great start in the Main Event, which was once again the key. I was right there and felt like I was going to have a good race but unfortunately, I crashed in the sand, it was really tricky. I got up and lost so many positions but I tried to fight back and make up the most points possible but there’s not much to say about sixth place. It’s tough but you have to stay on two wheels and stay up front.”

In the 250SX Eastern division, rookie Maximus Vohland continues to make a positive transition into the pro ranks with another consistent top-10 finish. In 250SX Heat 2, Vohland grabbed a third-place start aboard the KTM 250 SX-F and he battled inside the top-three for most of the race. He got passed with four laps to go but he finished strong to secure a fourth-place transfer into the Main Event. In the main, Vohland put himself into a seventh-place start and he held his ground, swapping positions inside the top-10 for the remainder of the race. In the end, Vohland once again prevailed with consistent and promising performance to finish eighth in only his second professional race.

Vohland:“The race tonight was pretty solid for me. We wanted to improve on starts from last Saturday and I was able to get a good start in the main, so that was great. Still have a couple more things we need to tweak but so far so good, we’ll just keep chugging along.”