Osborne, Wilson and Anderson on Houston 2 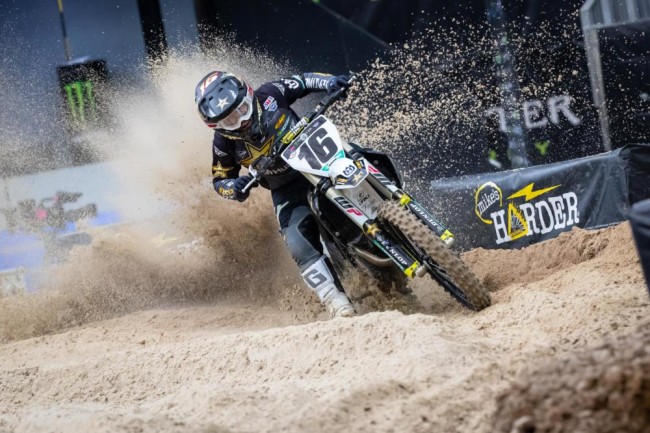 The Rockstar Energy Husqvarna Factory Racing Team had all the ingredients for a successful night in Houston, where Round 2 of the 2021 AMA Supercross World Championship took place inside NRG Stadium for the second time this week as part of its three-race stretch in the Lonestar state.

In the 450SX class, Zach Osborne delivered an exceptional performance throughout the day but an unfortunate mistake at the end of the night cost him a well-deserved podium finish. Teammate RJ Hampshire experienced a similar story, battling for the 250SX Main Event victory before a race incident with another rider took him out of contention midway through the race. Osborne came out swinging as he claimed the fastest time in the first 450SX qualifying session, carrying a third-overall into the night’s racing program. He kept the momentum rolling into 450SX Heat 2, where he settled into second early on. After applying pressure to the leader for a solid 10 laps, Osborne secured a close second-place. As the gate dropped for the Main Event, Osborne found himself just outside the top-five and he quickly began a forward charge, overtaking the second-place position early on. He set his sights on chipping away at the lead gap but he pushed the front end and went down with two laps to go, ultimately finishing 10th in the Main Event.

“Overall, it was a really positive day for me,” Osborne said. “I just felt really supreme all day and things were easy for me. I had a good heat race, felt really good gelling with the track, and in the Main Event the same thing. With two to go, I just pushed the front in a rut and there she went. It’s a big mistake that veterans like myself typically shouldn’t and wouldn’t make so it’s disappointing and frustrating but I’m healthy and safe and my bike is really on point right now so I’m happy to come back and give it another go on Saturday.”

Anderson bested his Round 1 performance all-around, finishing inside the top-10 on Tuesday. In 450SX Heat 1, he had a great start rounding the corner inside the top-three but a first-turn crash forced a red flag restart. Anderson was able to get another great jump but he got caught up behind another rider and shuffled him just outside the top-five. Riding a consistent race, Anderson secured sixth. In the Main Event, he didn’t get the most favorable start as he rounded the opening lap in 15th. He passed his way into the top-10 early on and battled with a deep field of riders to advance his position. With two laps to go, he overtook eighth and he held on to secure that position through the checkers.

“Practice probably didn’t look so good on paper but it went better and my heat race went better than last week, so those are definitely positives,” Anderson said. “In the Main Event, I kind of rode into eighth place and that’s what I ended up with tonight. It’s not the way we wanted to start but hopefully we’ll keep progressing and we’ll just keep going.”

Wilson got off to a top-10 start in 450SX Heat 2 and he engaged in an intense battle for the final transfer position early on. With three laps to go, Wilson kicked it up a notch and made two more passes to ultimately secure sixth. In the Main Event, Wilson got off to another top-10 start and he battled with his teammate Anderson early on. He raced just outside the 10th-place battle all race long, ultimately finishing 11th in the Main Event.  “Tonight, was a little bit better but 11th is not the result we are looking for,”

Wilson said.“I just needed to start up front and get in that fight a little more but I was right there. I mean, I am surrounded by guys who are winning races so I feel like I am strong enough to be in the mix, I just need to put myself in that position every time. I am getting better and more comfortable, now I just need to believe in myself a little bit more and I’ll be there.”

Hampshire, the fifth-place qualifier, secured a top-five start in 250SX Heat 2 and he quickly moved into fourth. Late in the race, Hampshire made a move into third where he secured a top-three transfer spot. In the Main Event, he put himself in a favorable position off the start where he mixed it up inside the top-three early on. While making a charge in second, Hampshire went high in a corner and another rider came into contact with him, sending both riders to the ground.  Hampshire, dropping back to 20th, worked hard to charge his way back through the field, ultimately finishing 17th.

“It was another rough night, I started off with a pretty big practice crash and then did what I could to salvage the heat,” Hampshire said. “I got a good start in the main, the bike is awesome out of the gate, it was just an unfortunate situation with Forkner because I had the speed and was just clicking off my laps. I’ll give it a couple of days to recover and knock off a win here soon.”