Interview: Joe Clayton on that huge crash in Belfast and his AMA supercross experience 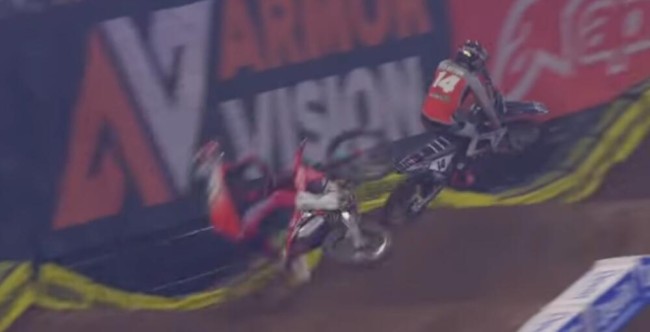 We caught up with a sore Joe Clayton on Saturday night in Belfast with the indoor specialist still feeling the effects of his huge crash with Jack Brunell on Friday night while they battled for the lead in the heat race!

Clayton was looking great all day on the Friday and even came back to win his next heat race in impressive fashion after the big spill, but a crash in the main ended his hopes of a podium. A sore Clayton then raced Saturday night, but things just didn’t go his way with bad starts and a crash that saw him just fail to make the main event. A tough weekend but at least he’s healthy after one of the biggest crashes you will see!

I think that was all the highs and lows of Arenacross in one weekend for you, how are you feeling after two rough night?

I am a bit annoyed about today (Sat). I am still pretty sore from yesterday but I am happy to come away with no broken bones and I will just use these next couple of days to rest and get better for next weekend.

Talk about that crash, it was an explosion with bikes and bodies everywhere, you ended up in a different lane! How was it from your perspective?

Pretty sore (laughs). I wasn’t expecting Jack to go for the triple, I thought I was in front, so I went acrsss and he came down on me and that catapulted me accross and we both ended up pretty sore!

Watching it, you could seee it coming, but from a rider’s perspective you wouldn’t have known…

I didn’t reallty think it was going to happen but there was a tuff block on the track and I had to go a bit wider than normal and yeah, it’s just one of those things that happen unfortunately. (See the crash on Clayton’s Instagram below)

Then you came back and ran away with the next heat, which was pretty impressive!

Yeah, I had a good heat race, I would say I was probably the quickest yesterday which helped me a lot but unfortunately today, I’m a bit sore and never got a good start – none of that helped!

Everything that could go wrong did go wrong! Just on the head-to-head, it is pretty entertaining, what is that like to do? It’s a bit like chess!

Yeah, it’s good, I was a little bit too nice, I should have nailed him a bit harder but it’s still round 1 isn’t it? I don’t need to be going hurtuing anyone. Just come away and try and sort it out for next weekend.

On AMA supercross, you did that a bit last year, how was that experience and how does it compare to this?

It was amazing, it was massive! It was really good but so much bigger than this! But this is a great starting point with all the youth, it’s the perfect stepping stone for sure.

And was it intimidating riding the first few laps of those tracks?

Yeah, they were pretty big and you had to get used to it fast! I had some good people around me that helped me, and it made it a bit easier.

Have you plans to do any more?

Yeah, I definitely hope to go back. I would probably go 450 because I am a better 450 rider, but yeah, we will see how it goes.

And outdoors, are you doing any over here (UK) this year?

See the huge crash at the start of Tommy Searle’s vlog below: