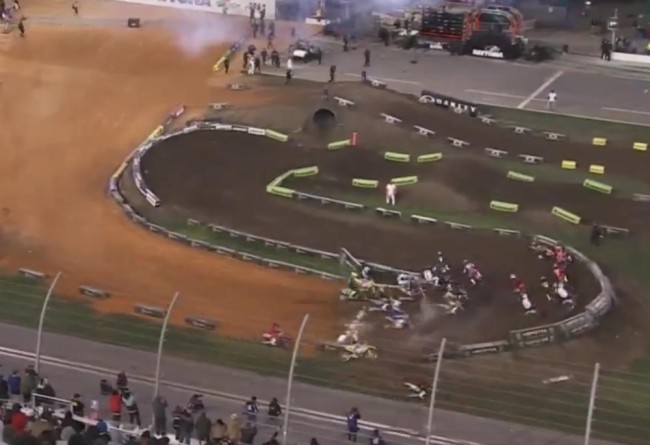 Ken Roczen was not happy with the move Cooper Webb pulled in turn one that left Ken, who looked like he had the holeshot, pushed out wide and having to come through the pack with Tomac and Webb getting away 1-2!

Roczen then got up back to Webb’s rear wheel but couldn’t make the pass finishing fourth, only for Plessinger to make a mistake in the last rhythm section and allow Webb to steal second – and now there is only two points between Roczen and Webb in the championship.

A pumped up Roczen said after: “I got a really good start and Webb pushed me really wide into the tuff blocks. I think he’s scared of me, that’s why he plays these little game but little does he know I like to play as well. From here on out I’m just going to put that little bit extra focus on a daily basis, even at home, to be that much better on the weekend. He’s fuelling the fire and I’m ready for it! I like to play so let’s go!”

An unapologetic Webb wasn’t backing down in the press conference and fired back: “Yeah, when we got back he was running his mouth he wasn’t too pumped but I’m not too sure why. I saw an opening and went for it. He’s focusing on himself this year and clearly he showed how much he is focusing on himself.”