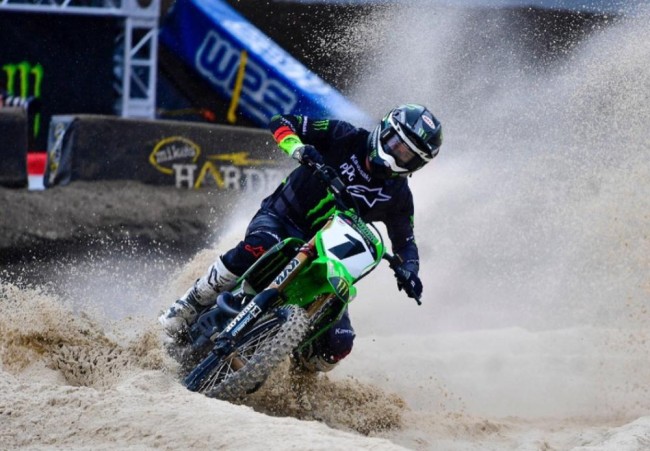 Eli Tomac won his fifth Daytona supercross and is now tied with Ricky Carmichael for the most wins in history at the historic venue to give himself renewed hope for the 2021 supercross title just when he needed to deliver!

An ecstatic Tomac said: “I was so pumped on that start! Daytona is our house, I love it. That was crucial for us to get that win.”

The action began instantly in turn one when Ken Roczen led going in but got pushed wide by an aggressive Webb which let Tomac take the lead and from there he was never headed.

Aaron Plessinger however was on fire and passed Webb and even went to go after Eli Tomac early on before Tomac began to stretch out the lead.

Ken Roczen was outside the top five but fought hard and got himself on Webb’s back wheel with five minutes to go – until he messed up a rhythm section and let Malcolm Stewart by! Roczen got back past Stewart with just over a minute to go and then caught back up to Webb on the last lap but couldn’t quite get close enough to make the pass. Then to add further frustration for Roczen, Aaron Plessinger messed up the final rhythm section up and allowed Webb to sneak a second!

An angry Roczen, who is now just two points ahead of Webb in the championship, said: “Webb pushed me really wide into the tuff blocks, I think he’s scared of me that’s why he plays these little games. He’s fuelling the fire and I’m ready for it!”

In the 250 class Cameron McAdoo took his first ever supercross victory in superb fashion after running down early race leader, an impressive Stylez Robertson, to take the lead and runaway with the win in style.

McAdoo, who raced the Amateur supercross at Daytona in 2016, said: “This is unreal, that was what we worked for. I have such a great group of people behind me. This is just the beginning. “

Young Robertson held strong for second in a great ride in his rookie supercross season and Pierce Brown rode a fantastic race in his first for Gas Gas and first since his knee injury last season to hold off a charging Justin Cooper for third.

Cooper had a terrible start and then an off-track excursion exiting the sand section but rode hard to come up to fourth right on the back wheel of Brown. Hunter Lawrence was in the mix for a podium early but made a mistake and ended up in the battle with Cooper and Marchbanks as they came through from the back of the top ten, Lawrence couldn’t hold the Yamaha duo off but did get back to sixth.