Video: Everts on a 125 Suzuki plus Harry Everts on Stefan – he could have won another world title! 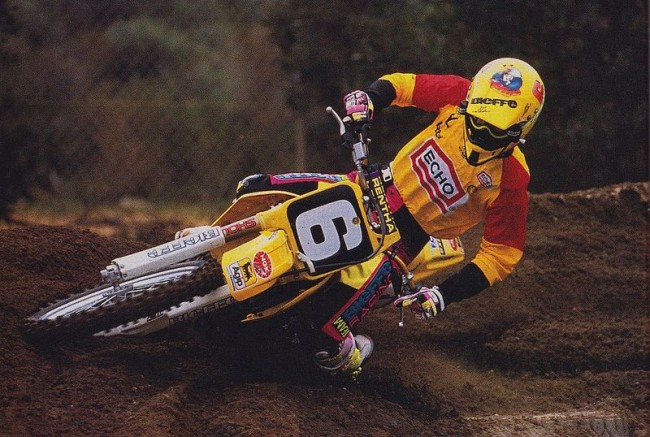 Check out Stefan Everts on a 125 on his way to his first world title below – then read or listen to what father Harry had to say to us about his record-breaking son who went onto win five MXoN wins, ten world titles, 101 GP wins and leave the sport by beating James Stewart at 33 years old.

You won four world titles, did you ever think Stefan would win ten? Was that ever a goal you had? I know you worked closely with him, to see your son win ten world titles, that must be amazing.

You never think before. You want to see your son win his first Grand Prix, that is already winning something. Then you win one more Grand Prix, then one more, then he becomes world champion, and you think ah good. Then one more, one more. And then he passed me (in titles) and it was more and more (didn’t mind Stefan beating his title haul) – I wanted him to win 20! Then he wins three races in one day, then he wins 100 GP and he becomes ten-time world champion. That is something special.

His riding style, in America more riders are starting to stand up now on the balls of their feet but Stefan was doing that when he was a teenager in the 1990s. Did you coach him to do that because his technique and balance was always perfect, that’s probably why he was able to win ten titles!

He did it by himself. I was always standing up because of my Polio, I did not want to use my leg, this is why I was standing so much on the bike. When it was mud race, I was always happy because I always stand up and with Stefan, he always did it by himself, I never taught him to stand up. Okay, when Liam started Stefan put him in a good position on the bike, because Stefan rode so easy and Liam does the same, like papa.

If you lined up all the greatest riders that you have seen from Joel Robert to Stefan, yourself, Ricky Carmichael, Stewart, Herlings, Cairoli.. all these top guys (and more) who do you think would win in a race or championship, who is the best of the best in your eyes?

Of course, it’s my son. Yes, he’s my son but he was a special rider. When you are ten-time world champion and 101 Grand Prix. He stopped when he was World Champion don’t forget. At Matterley Basin at the MXoN, he wanted to stop. I said, ‘why are you stopping?!’ He could have won another world title, 100%, but he stopped like a real world champion.

No, it was nothing to do with talent. When I started riding I had nothing, I had to do everything by myself, not much help, I was born with Polio, people made jokes with me when I was in school because I had a very bad leg. Everything from my grandfather, my uncle, my family I wanted to be a champion and I did everything myself. With Stefan coming it was easier but I wanted him to do it like I had to do it, that was not the talent. He had the talent for himself but to make him hard was a different thing.

You can have talent and be nothing. You can be the best rider here and if you are not training you will never be a champion. Some people say yeah, give me a factory bike and I will be a champion, no, you have to be ready for that, that is the difference for me.

And that’s that’s what made him be ten time world champ? The mind, heart and determination?

Listen to the full interview with Harry below or read it here: