Video: Reed on Orlando 2005 – the intensity was just through the roof! 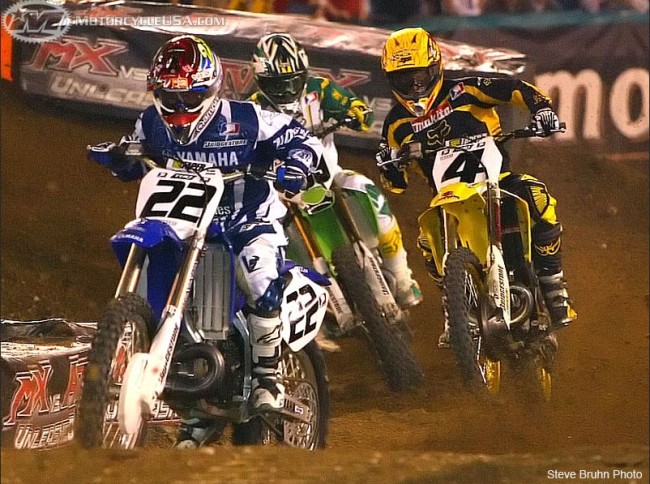 It was all about January the 8th, 2005. That was when James Stewart would FINALLY move up and take on Ricky Carmichael and Chad Reed in 250 supercross. We all wanted it to happen a year earlier after James dominated the 125 class, but for whatever reason, Stewart stayed down an extra year adding another 12 months of anticipation – but the then the rain got in the way!

Anahiem one was a mudder. The trio never got to battle and the winner of the race was Kevin Windham. Then, at a dry Phoenix the next weekend, an over excited James Stewart crashed in practice and the long-awaited battle on a dry supercross track was put on hold again!

But finally in Orlando a couple of months later it was happening. This is what the whole world had been waiting on, the scintillating and mesmeric talent of James Stewart, taking on Carmichael and Reed – and this time it was in the home State of the two Americans and Aussie Reed lived in Florida as well!

For the younger generation it was similar to when Herlings moved up to take on Cairoli in MXGP – this was what everyone had been waiting years to see.

At the time Reed and was trying to chase down championship leader Carmichael in the points but even that was a side-show, this was all about one race featuring three men for the first time ever in the dry. The tension was palpable and even watching the race back now you can sense the sizzling anticipation of what was about to happen.

“The atmosphere, and still to this day, I don’t think I have witnessed anything like it, said Chad Reed about that race on the Whiskey throttle show. “As a rider you knew what it meant, there was a different meaning. James was back, I had won the week before in Daytona and it was just like, ‘Ok I won in Daytona, let’s go!’ The intensity was just through the roof. All three of us just went to front and you could just see.. Ricky, very rare and very few times have I seen Ricky riding on emotions and you could see him, he was more erratic, he was pushing the envelope and it was like ‘Alright, this is is, it’s go time!’

“Still when I see it on video I get excited about it,” admitted Reed. “Seeing those two guys cartwheel in front of me, I could feel the intensity myself – I was also on the limit! Somehow I hadn’t made my mistake yet, I seen Ricky lose the front and throw it down, then James goes, ‘Okay, Ricky’s down, I’m going to up the pace more,’ typical James! And you’re like, ‘Ohh boy,” then you are just like, ‘go, go, go go!’ Then suddenly he cartwheels it in the whoops and at that point you just get a breath of air and are goin, ‘ok, now don’t do any of those things!’

“I will take that one to the grave, it was just an unbelievable feeling and so hard to put it into word on how intense, the emotional side of it and how much all three of us wanted to win.”

It was a race no-one from that time will ever forget, it was more than a just a race, it was a battle for legacy. See the sensational race below including heat races – for just the main event go to 25 minutes in:

For Reed’s thoughts on that time watch part two of his interview below: