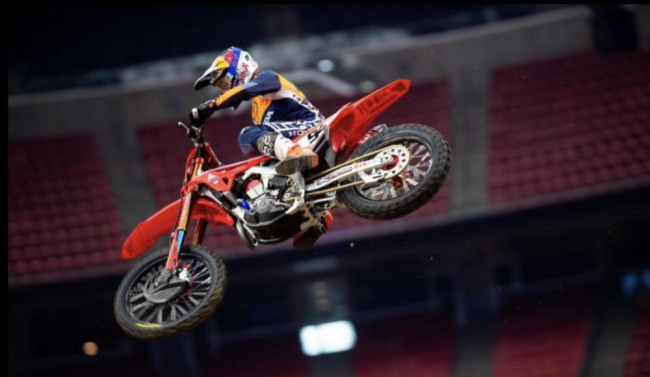 As we go into round four of the supercross series it is still all to play for with three different race winners in the opening three rounds – but are the championship favourites starting to come to the fore?

Ken Roczen’s consistency and speed no matter where he starts has let him back into the championship lead despite the red cross flag and Dean a wilson incidents. albeit he leads by just one point from former champ, Cooper Webb. The Red Bull KTM rider has turned things around big time with that win in H3 and absolutely has the momentum coming in to this weekend.

Justin Barcia despite some mistakes, is still right there on the Gas Gas and appears to be ready to win at any time and Eli Tomac, despite not being the fastest guy so far this season, already has a race win and is only six points behind Roczen.

But with the class still deep and the likes of Ferrandis and Cianciarulo showing capabilities of podiums and potentially a win when things click, as and both only 9 points out of the lead, and Musquin only 1 back, there are still plenty of surprises left in the series as they enter another three races in a week in Indy and that’s before you take into consideration Zach Osborne whoops tenth place results do not reflect his podium speed.

See some press day action from Indy below: