Coldenhoff rates Dovizioso’s motocross skills: “he was only seven seconds off!” 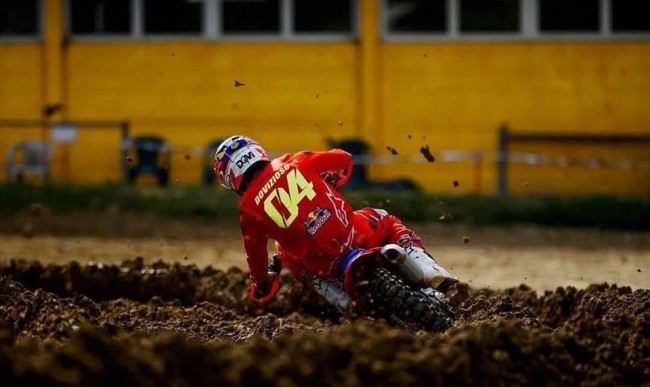 Monster Energy Yamaha’s Glenn Coldenhoff found himself in illustrious motorcycle racing company during his riding and testing sessions in Italy towards the end of January. The 29-year old rode laps of the Cavallara circuit, near Pesaro, with Andrea Dovizioso and Danilo Petrucci.

Coldenhoff had travelled to Italy for initial tests with the YZ450FM after recovering sufficiently from the thoracic vertebrae injury he has sustained at the Grand Prix of Flanders last autumn. The Dutchman was able to share track time with keen motocross fan Dovizioso. “He’s pretty good. He has some good speed and a nice style,” Coldenhoff assessed of the 34-year old former MotoGP championship runner-up. “He rides a 250F four-stroke Yamaha and was only seven seconds a lap off, so that was impressive.”

“He studied my riding and asked me the kind of questions that made me think he’s quite smart and observant,” Coldenhoff continued. “I think he’s the type that is always keen to learn and looks out for the details.”

Coldenhoff, a former Red Bull KTM rider and GP winner with both the 450 SX-F and the first to give the GasGasbrand an MXGP victory, was also able to examine the pace of new KTM Tech3 Racing MotoGP runner Danilo Petrucci (“a really nice guy and I was also surprised by his speed”).

“We rode an old-school track that was even tricky for me with very deep lines and very steep hills and really technical sections,” #259 explained. “I enjoyed it because we don’t see these kinds of tracks often. Danilo was also around 6-7 seconds off with the KTM 250. We chatted about training and I was asking about MotoGP because the sheer speed of the sport is so interesting.”

Dovizioso has been linked to the Repsol Honda HRC team for 2021 as further speculation over Marc Marquez’ fitness and his ability to fully recovered from the broken right humerus that has undergone three operations continues to rise. The Italian is currently unemployed after leaving the Ducati Corse team in the wake of eight seasons steering the factory Desmosedici and turning down test rider contracts.

Coldenhoff revealed that Dovizioso seems to be looking more towards the dirt rather than the tarmac for the rest of 2021. “They were both thinking of some Italian championship races, not the International one[Internazionali D’Italia], for Dovi it’s a bit different as he won’t be racing this year,” he said.