Video: Bradshaw at Foxhill on a 1989 500 Honda – British two-stroke championship 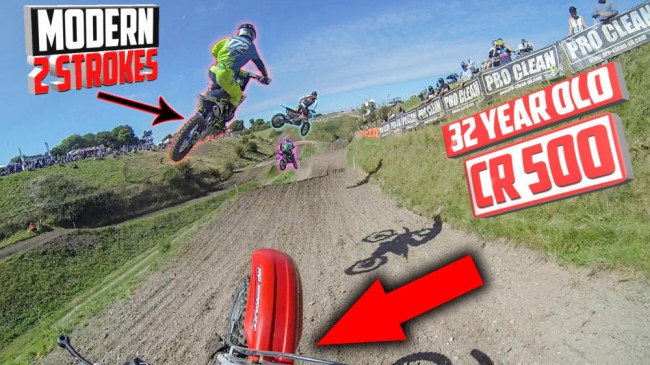 Back in 2017 we produced the original ‘For The Love of 2 Strokes’ documentary trilogy which followed Neville Bradshaw as he raced the British two-stroke championship on his old Honda’s. The series went on to get over 1 million views on our YouTube channel –  999lazer.

A few months later we added a short 2 lap GoPro clip from one of the races featured in the series, and this clip quickly became the biggest single video our channel with more than 17 million views! During lockdown we decided to revisit this awesome day of racing. We pulled together all the raw footage from this particular race – from both the GoPro and the 2 ground cameras we were using – and edited a full multi-cam race (with commentary) of what  has become one of the most viral dirt bike videos on YouTube.

It features Neville Bradshaw riding a 1989 CR500 (this was the first time he had ever raced a 500) at the British Two Stroke Championship (held alongside the Maxxis British Championship). He was battling for the title against Mike Kras (former EMX300 champion) and although Nev was in the title fight and had been racing a CR250 all series and stood more chance of winning on that bike, he’d always wanted to race a CR500 at Foxhill!

It’s an awesome race containing a tonne of previously unseen footage. With lockdown putting hold on racing here in the UK for a while, it’s pretty cool to watch this back and enjoy the sound of two strokes ripping around Foxhill.