Friese on collision with Barcia – I held my line 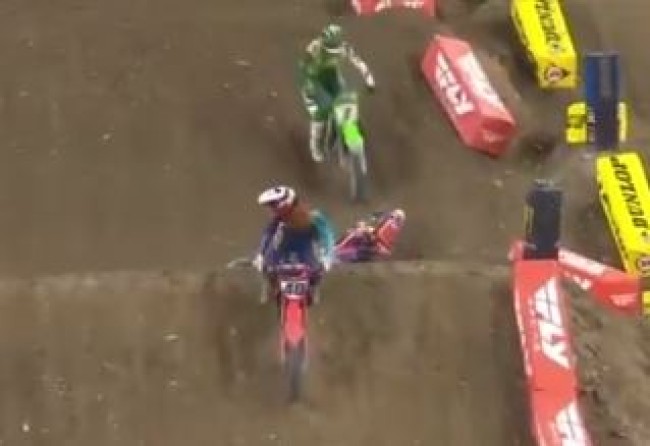 Vince Friese has given his version of events in the collision with Justin Barcia that has all but taken away the Gas Gas rider’s chances of a title – and ended up affecting Eli Tomac’s title chances too when the Kawasaki rider got caught up in the incident as well!

Friese however says he stuck to his line and it was Barcia who was too impatent – but should Friese just have moved over sooner?

This is what he had to say to Swapmoto: “Not a great weekend for me, I’m heading the right direction. I’m still recovering from the injury from the crash at Houston, I have got a lot of swelling in my back and hip.

“I think I started tenth in the main event, got passed by a couple of guys, AP got me and Osborne got me and I think I was in about 12th, having a battle with Brayton and my teammate Broc. Obviously Barcia coming up behind me, there was that incident, really unfortunate. I felt I held my line, that triple was a spot where you didn’t want to change your line last second and obviously I was planning to get out of the way, I had just gotten out of the way for Cooper and Kenny.

“Yeah, it was unfortunate. I think Barcia rushed that a little bit, it was my line I was taking all night long. It was really unfortunate. I hate to be a part of that, I hate to be getting lapped but the tracks are tight, the dirt is really soft and there is a log of fast guys with a 40 second lap time.”

See Friese’s full comments and hear from more riders including Roczen and Stewart below: