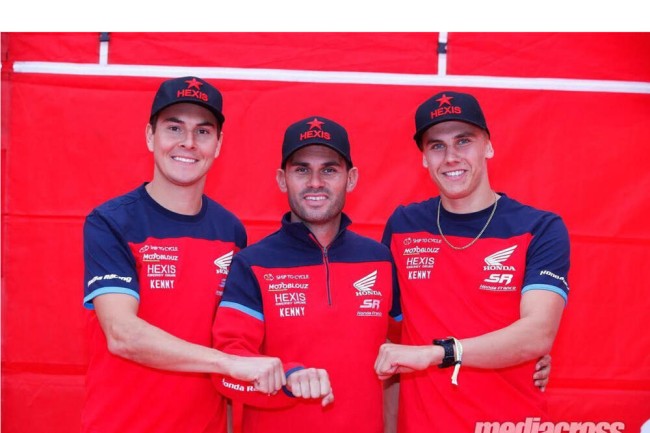 The Ship To Cycle Honda Motoblouz SR team is pleased to announce the signing of Valentin Guillod, who joins Stephen Rubini and Emil Weckman for the 2023 season.

After having relaunched his career this season, notably by winning titles in his native Switzerland, by winning several events in the French Elite championship – which he finished runner-up – while achieving a few events in MXGP, Valentin Guillod is joining us for next season. It’s a return since he had played the 2020 season alongside us, but it’s also another Valentin who is joining us.

“I’m super happy to have signed with Honda SR to compete in the entirety of the next World Championship. This year my goal was to rebuild myself by finding Yves (Demaria), and to perform in order to return to the World Championship. I’m happy to be back alongside Josse, with the ambition to do something good; I have been working with Yves, Stephen (Rubini) and Emil (Weckman) for a year now, there is good competition between us and the objective is to score in the top ten in MXGP and to make the team colours shine”, confides Valentin, who resumed training this week in the South of France.

It is therefore a trio of riders who will represent the Ship To Cycle Honda Motoblouz SR team next season, with Valentin and Stephen in MXGP and Emil in MX2. With a new organization as the three riders are trained by one and the same person, Josse will be able to concentrate fully on his job as manager.

“Having the same trainer for all our riders is an ideal solution, we see this clearly in the sand program where Christophe Meyer is the official trainer of Lars and Cyril. Yves has great experience, and it was at his side that Valentin had his best results; he really questioned himself last season when he found Yves, we saw him fight in the top ten in several GP’s. We had a long discussion with Yves, and the logical conclusion was to bring together the three riders he is looking after. We hope that this new organization will pay off for our three drivers,” analyzes Josse who also gives some news of Stephen Rubini, who had knee surgery several weeks ago.

“You should know that he had a difficult season with this old ligament injury, and on many occasions he gritted his teeth to do his racing. He had surgery as soon as the last race was over, and rehabilitation is going well. It’s a long time, we saw it with Emil who had the same injury this season; Stephen should return to training in January, which will allow him to attack the season in full possession of his means”.