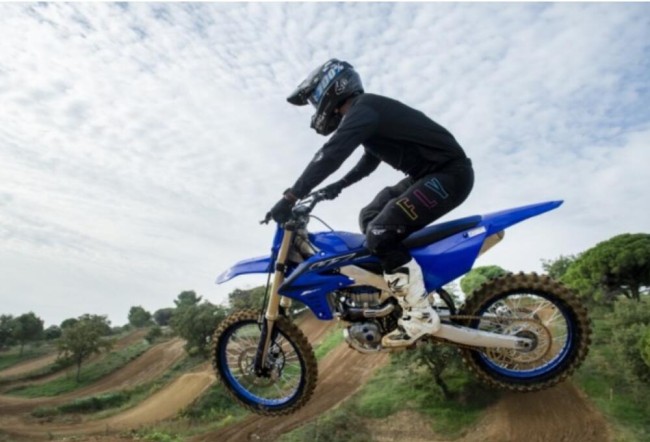 To test the flagship of the Yamaha MX lineup, we traveled to the south of France. Once there, we saw the new YZ450F in the hotel lobby.  Besides external changes, the new engine also stood out. More so, except for the inverted cylinder + head, you saw little that was reminiscent of the previous model year.

The new YZ450F was designed following the philosophy “Put the rider first.  That sounds logical you might say. Yet that slogan is not always obvious in practice. Just look at the past of 450 crossers. Every manufacturer was on the hunt for more and more power. Until engines became so powerful that only a few could really do anything with them. And that was not without risk either.

That “Put the rider first” approach also translates into the Japanese way of working. A goal is set and all employees then focus on achieving that goal. The importance of the group is greater than that of the individual. Everyone in service of a higher goal, in other words. In Yamaha’s view, that means: Creating complete harmony between rider and machine. Whereby motorcycles become, as it were, an extension of the rider’s body and mind. With that objective, Yamaha began development of the new YZ450F. Ambitious? Absolutely!

So what has changed?

For 2023, the engine of the YZ450F received a total redesign. In the process, every part was assessed and analyzed. That exercise yielded the most significant change to the engine since the original layout with inverted cylinder head in 2010. Thanks to a forward-facing intake and rear exhaust, this engine layout ensures a high level of ride efficiency. The positions of the airbox, fuel tank, exhaust and the rearward-sloping cylinder also contribute to mass centralization.

The all-new engine is lighter as well as stronger. More linear delivery for more pulling power and improved handling make the 2023 YZ450F easier to ride at all rpm, according to Yamaha.

The reverse-head engine benefits from an optimized combustion chamber, a redesigned piston and a lighter cylinder that improve power and behavior. To allow an increase in speed of 500 rpm, the new engine is equipped with a high-precision, low-friction camshaft chain. For greater efficiency, the crankshaft and connecting rod have been redesigned. A lighter sliding bearing replaced the previous needle roller design. A new single balance weight has a new hollow balance shaft and this improved lighter design reduces vibration.

For 2023, the highly efficient, forward-facing intake design has been further enhanced by a reshaped intake port with a straighter passage to the cylinder head and the use of larger-diameter 39 mm titanium intake valves that increase air intake volume by 9% at maximum valve elevator. To complement the improved intake layout, the shape of the exhaust port has also been revised for a smoother connection to the exhaust.

The previous model’s two-piece steel/aluminum clutch has been replaced with a durable and lightweight one-piece steel design with disc springs instead of conventional coil springs. This new clutch is significantly lighter and sleeker, weighing 0.75 kg less and feeling more direct and pulling the lever more lightly.  Unfortunately, the hydraulic clutch has not yet made its appearance. However, that is available as a part in Yamaha’s GYTR catalog.

For more durability over the wider rev range of the more powerful engine, the new YZ450F engine is equipped with an updated cooling system and a new dry-sump lubrication system. In addition, the timing chain, tensioner pulley and connecting rod are also new.

In keeping with Yamaha’s “Rider first” approach, the Japanese paid close attention to the frame. This resulted in an aluminum bilateral beam frame that offers a lighter feel, greater agility and improved stability.

To arrive at the desired character and behavior of the new chassis, the brand did not go overnight with the crossed tuning forks. From the geometry, the specific stiffness balance of each individual component to the way the components interact with each other, everything has been tuned. An important change for 2023 is the displacement of the connection between the tank rails and the head tube, which is now 15 mm lower than before – and the connection between the frame tubes connecting the tank rails to the down tube has been lowered by the same amount .

Compact and sleek bodywork of the next generation

The YZ450F features an all-new “Horizontal Movement” plastic that gives the 2023 YZ450F a sleek and clean new look. Every single exterior panel has been redesigned. The result is a sleeker and more compact package with a seamless and rounded finish for greater maneuverability and freedom of movement on the bike.

A new supply route for fresh air to the intake allows the elimination of front air ducts. This has allowed the installation of much more compact radiator shrouds with a narrower width of 50mm, as well as a narrower new fuel tank – giving a much sleeker

The compact front fender is combined with a new shorter rear fender.  Together with the new seat, air filter cover and fuel tank, the YZ450F has a flatter horizontal profile and, in terms of plastic, a much shorter length from front to rear. New side panels and fork guards complete the dynamic new look.

The relative positions of the three elements of the rider triangle – namely the saddle, handlebars and footpegs – have been changed to achieve an ideal riding position for different body types. The seat height has been increased by 5 mm and has a much flatter surface.
Because of this, you can move easily when turning corners and you also have fewer obstacles to move yourself in the air. Another improvement is the more rounded profile of the left and right sides of the saddle, making lateral movements of the body easier and more comfortable.

The footpegs are now positioned 5 mm lower, increasing legroom a total of 10 mm for larger riders. In addition, the handlebars are adjustable to four positions for a more natural riding position while the rubber handlebar mounts provide riding comfort. But still prone to skewed handlebars as my fall in session 2 confirmed. Although this was quickly remedied by setting the handlebars against the rash and giving them a good push.

New suspension valves improve shock absorption and increase traction.  To make adjustment easier, the KYB forks are equipped with a manually adjustable compression damping adjuster. Previously, that adjustment screw was under your handlebars. Pretty annoying because that always damaged the screw and also sometimes the handlebars. Fortunately, this problem is now solved.

For those who do not have much experience with suspension adjustment, there is now access to clear information and recommendations on suspension settings via the Power Tuner app. That well-known Yamaha application, downloadable on your smartphone, supports you to take guesswork out of adjustments. Top!

The rear brake plays a key role in changing direction and entering corners effectively. That feedback you get as a rider is crucial to maintaining control. That’s why the new model features a new rear brake hose with reduced stiffness that improves the balance of brake input and gives the rider more precise control.  Especially for downhill turns, I now felt that the brake was more controllable. Because that rear brake on the previous generation of Yamaha’s sometimes felt spongy, you quickly got an all-or-nothing relationship with the rear brake. In this respect, too, it is a great step forward.

The use of a new traction control system is another example of how Yamaha helps riders get the most out of themselves. This electronic control system offers two levels of assistance and an OFF function. By preventing the machine from losing grip completely, the rider can concentrate fully on the track ahead. Personally, I prefer to ride by feel in these conditions but of course that is also a matter of what you are used to. It is definitely also a system that you as a rider should experiment with to find out what works best!

The Launch Control system has a new “Rev limit” feature that can be set with a maximum rpm between 6,000 and 11,000 rpm in 500 rpm increments. This allows you to come off the gate full throttle and concentrate on the head start. When the Launch Control system recognizes that the start is complete, the Rev limit function is automatically disabled. When 3rd gear is reached, the Launch Control system is deactivated. I have personally tried the launch control at different settings. By starting at 8,000 rpm: which felt like idling away. Then I went to 9,000 rpm, which was an improvement, but for me the perfect “launch” was at 10,500 rpm. Of course, this depends on your weight, the surface and from where behind the fence you launch. For the test, like the GP riders, we were able to start from a grid.

Yamaha’s designers have analyzed every major and minor component in their mission to make the new YZ450F one of the lightest MX1 machines. Read: measured “wet,” with a full fuel tank.

A new fuel pump, airbox and chain guide contribute significantly to the lower weight and help centralize mass for greater chassis agility. Even the smallest components – including the throttle cable, steering switches and water pump propeller – have been redesigned to reduce weight to just 109 kg with full tank – a reduction of 2.3 kg. This “diet” was certainly necessary for Yamaha’s 450 crosser. Not only on getting rid of the bulky feel but also to address the wide front end. Still, a point that bothered many riders. I myself found it -compared to more fitted bikes- often a hindrance when steering into the really short corners.

For 2023, the Power Tuner app has been upgraded and features an intuitive “Quick Tuning” function. An excellent development because now it is much easier and faster to select the desired engine characteristics. Moving a slider from ‘Smooth’ to ‘Aggressive’ is as simple as that. This actually gives you 8 mappings to choose from. The new app includes additional features, including a lap timer, RPM, fuel economy, speed and other data. As mentioned earlier, there is also a page with frequently asked questions about the suspension.  This page does not make you a suspension specialist yet, but it can already help you a lot. Either to get a better understanding of how to adjust the suspension or to brief a suspension specialist on what you want.

Yamaha has really changed course with the new YZ450F in terms of handling, power and riding position. They have also listened carefully and addressed a lot of old criticisms such as slimming down the large radiator shrouds and the air filter housing. Because of these changes, the engine now sounds a lot quieter. They also took a good look at the thermal problems that the Yamaha’s used to have by keeping the oil completely separate from the water pump. In the previous generation of Yamaha’s, this was definitely an issue for people who eagerly used the clutch.

The wide choice of mappings already programmed into the power tuner app by default offer something for everyone. I have tried all maps myself but always came back to the second smoothest map. Purely because the engine gave an ideal power output. MC des Costières was a typical hard French track. So we are curious what works best on a sandy track in the Netherlands or Belgium.

Handling improved a lot with the bike being so much leaner. I noticed how it’s easier to navigate the bike into a deep track and thus keep better control in the trail.  In the air, it’s also much easier to move on the bike now because it really feels like one.

Get more reviews below: