F4E GasGas Junior Racing to focus on youth in 2023 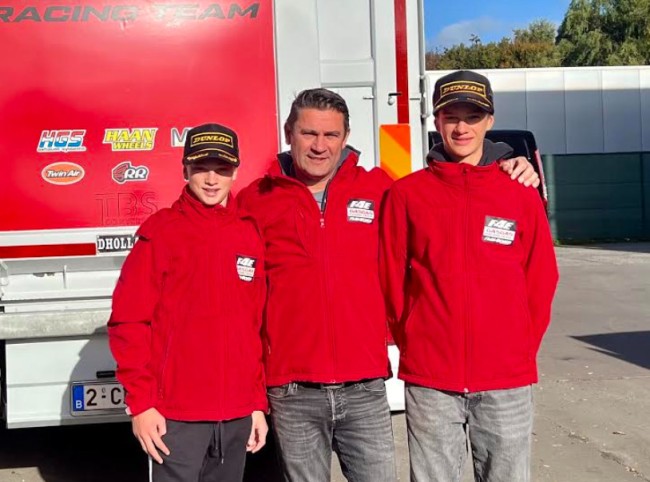 Team F4E Racing has been on the international motocross scene since 2018. The Belgian based team has always had a strong focus on youth, but this hasn’t prevented them from scoring EMX GP wins and podiums over the years. For 2023 the team keeps the focus on youth, but in an even more inspiring way.

F4E GASGAS Junior Racing will start the new season as a Factory Supported Junior team. This means the GASGAS factory will be working with the team and supporting it in the ambition to guide and develop upcoming young riders.

“There is an important role to play in supporting youngsters”, says team owner Jimmy Verburgh. The Belgian knows what he is talking about. As a young and upcoming rider, he won national titles, became a GP rider and European champion. “The support of my family and guidance and experience I received from my dad (who was a European champion himself) played a major part in how I developed as a rider”, Verburgh says.

“We want to offer the same to young and talented riders. Help them to bridge the gap of being a successful youth rider to becoming a full professional motocross athlete at the highest level. There is a lot of support in the youth series, and factory supported riders of course get everything they need. We want to guide young riders through the gap that lies between minibikes and Grand Prix racing.”

All this will happen in a typical F4E Racing way. It’s a Belgian team, so they have one French speaking rider, Harry Seel, son of former Supermoto world champion Eddy Seel and national 125 champion in 2022. Next to him is the upcoming Flemish rider Ian Ampoorter, 3rd in the EMX North 85 championship and best Belgian in the EMX 85 finals in Loket this year. Both Belgian riders are 14. They will partner up with 15-year-old Austrian Maximilian Ernecker, one of the big talents on the European scene at this moment. The team will focus on guiding the youngsters on their way to becoming top riders on the international scene (note: the team will race the EMX125 series as well as the ADAC German series) and in the process aim for good results. The support of GASGAS is important in this.

‘‘We are happy to work with F4E also in 2023 and are looking forward to the development of the young riders, which are very promising. It will be an exciting season and the team and GASGAS will give their best to support the riders during their season’’ says Diego Clement, Manager Offroad Commercial Motorsports at GASGAS.