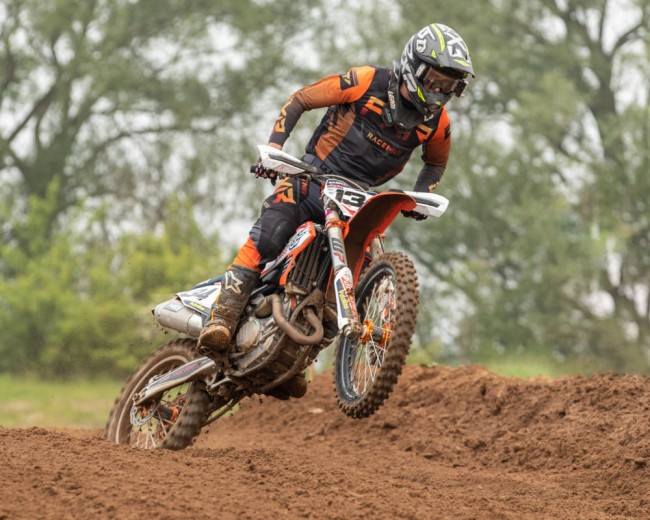 In the Pro Expert MX1 Class on the Saturday morning at FatCat, Liam got his head down and put in some fast laps to place himself in eighth position in qualifying so that left him with a decent enough gate pick, as the class was mixed together with the Expert riders, so it was a new format for the FatCat round.

Heading into Moto one, Liam got a decent enough jump out of the gate to push forward for a fifth place finish, just behind Verde KTM’s Jake Millward. Moto two on Saturday saw him chase down the front pack, gaining some ground on Todd Kellett to finish a great sixth despite the heat and roughness of the track.

Sundays Fastest Forty Class saw the fastest riders from MX1 and MX2 come together to battle it out for a podium finish. With the absence of two riders heading home on the Saturday this bumped Liam up for a higher gate pick heading into Moto one and two, which he grabbed a sixth in Moto one, and and fifth in Moto two.

“The track was rough,” Explained Liam. “It’s been a good weekend though, I got some good gate picks and as the day went on they got better and better, But in the first race I crashed in the first turn and was last but managed to work my way back up to sixth, It’s hard to get the start but Im happy with my results.”

Saturdays qualifying saw John finish up third, chasing down the Phoenix Tools rider Carlton Husband, and Conrad mewse. This left John with third gate pick of the day which worked in his favour in the tricky conditions.

Moto one saw John charge through the pack after tucking the front on the first turn, but he put the work in to push through to second position.

Moto Two John came together with Hitachi KTM’s Conrad Mewse on the start, causing him to suffer with some damage to his back and arm, however this did not deter the Scotsman as he landed a great fourth place, after a race restart due to another fallen rider.

Heading into Sunday and the Fastest Forty class, we saw John Battle his way through the pack of 250’s and 450’s combined, placing sixth in class in moto one, and third in class in the second moto of the day.

“Being out with the 450’s is always good,” Said Adamson. “First race I came together with Walsh, so not a very good start again And, and then we started working our way through and had a big crash on one of the straights. Second race, I got a good start in the second race, then my back just gave up halfway through so just literally rode round for the last ten minutes and finished up with second overall, the best of the rest!”

The team will regroup and be heading to Canada Heights this weekend, for round three of the MX