Mixed start for Rockstar Husqvarna in US Nationals 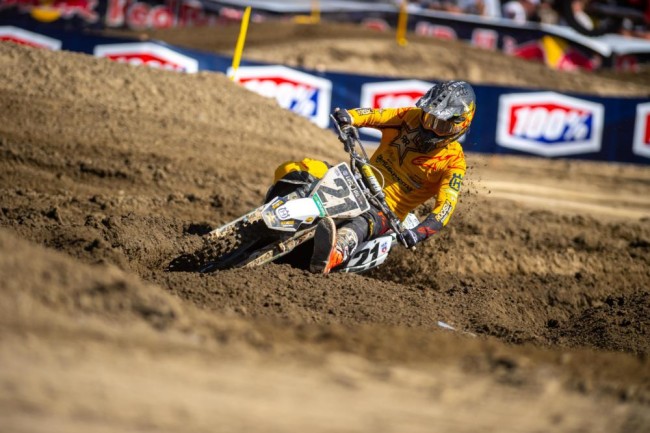 The Rockstar Energy Husqvarna Factory Racing Team returned to action on Saturday with the opening round of the 2021 AMA Pro Motocross Championship in Pala, California. RJ Hampshire made his first racing appearance back since injury, earning a solid third-place moto finish en route to a fifth overall in the 250MX class. Jason Anderson highlighted the team’s 450MX effort with a strong finish to the day, claiming fourth in Moto 2 and sixth overall on the day. Coming into the Fox Raceway National opener, all eyes were focused on the deeply stacked lineup in the 450MX class.

Defending champion Zach Osborne proudly displayed the #1 plate aboard his FC 450 Rockstar Edition but he knew he would have his work cut out for him as he eased his way back into a two-racing format following a back injury. As the gate dropped for Moto 1, it was Anderson who jumped into a top-five position early on but a tip-over caused him to drop outside the top-20 on lap one. He worked his way into a top-10 position by lap 11 and he finished strong in 10th. In the second moto, Anderson grabbed a top-10 start and he immediately put his head down to charge up to sixth about halfway through. With three laps to go, he put on a last-minute charge to ultimately end up fourth in the moto. With combined scores of 10-4, Anderson came away with sixth overall.

“It was not terrible day but we definitely need to keep building,” Anderson said. “In the first moto, I had a good start and tipped over while running fifth but I was able to make it back to 10th. In the second moto, I charged up the whole moto and was able to end up fourth, which was a good ride for me.”

Osborne got a ninth-place start in Moto 1 and he struggled to make moves throughout the race, finishing 13th. In Moto 2, he powered his FC 450 Rockstar Edition off the line to grab a fourth-place position off the start. He held strong up front for the first five laps before settling into fifth and from there he maintained a solid pace to end the day with a top-five moto finish. With moto scores of 13-5, Osborne earned 10th overall at the opening round.

“My day definitely could have been better but I’m still healthy and looking to get more,” Osborne said. “The first moto was a little disappointing and not what we were looking for but I turned it around and I’m happy to leave in a better spot than I was when I got here. This is the first time I’ve done two motos in a day since I started riding again so we didn’t have any expectations and to get a top-five in the second moto was a step in the right direction.”

Wilson got off to a 15th place start in Moto 1. He fought hard to work his way through the pack but he ultimately finished just behind Osborne in 14th. In Moto 2, he started just outside the top-10, settling into 13th for the first three laps. He experienced a crash on lap four that would ultimately end his day early as a result of a banged up bike and body.

“It was a little bit rough for me today,” Wilson said. “I had a little better start in Moto 2 and around the third lap I was hitting this jump exiting the corner and my rear wheel slid out off the face and I got a handlebar to the gut really bad and knocked the wind out of me and I couldn’t breathe. By the time I got up and going I was pretty far back and my bike wasn’t good enough to race. I went back and got checked out, all okay. It’s a disappointing first round but all we can do is keep trying to improve and get better.”

Hampshire got off to a seventh-place start in Moto 1 and he worked his way through the field in the first half of racing. Around halfway, he ignited a charge that would bring him just outside the podium battle. While running fourth, Hampshire was gifted the third-place spot, which he capitalized on to secure a third-place finish in the first moto. In Moto 2, he got a top-10 start and worked his way up to fifth by lap seven. Within striking distance of fourth, Hampshire went for the pass late in the race but unfortunately his line came together with the rider ahead of him and both riders went down. As a result, Hampshire dropped back several spots to finish ninth in the moto and fifth overall for the day.

“I’m happy to be back at the races,” Hampshire said. “I felt good all day. The first moto, I didn’t get a great start but we made some good passes and held onto third, which was sweet coming off injury and getting back racing. Looking at our speed and comfort this weekend, I know we have a lot to build on and we will be better.”

Jalek Swoll didn’t get off to the best start in Moto 1, where he rounded the opening lap in 18th place. He put his head down and charged throughout the moto, ultimately finishing 12th. In Moto 2, Swoll got an eighth-place start and maintained a solid pace inside the top-10 for the first eight laps. However, he ran into an issue with a lapped rider and went down, ultimately battling back to finish 13th in the race and 11th overall.

“It was an up and down day, practice was rough but I felt like we changed it a little bit in the races,” Swoll said. “Obviously, the first moto didn’t go as planned but I felt like second moto I was really grooving and being myself out there. All-in-all, I’m content with the day and I know we have some stuff to work on but I think the speed is pretty good for finally getting through a whole day of outdoors. We’ll regroup and be ready for Thunder Valley.”

Stilez Robertson came out swinging in Moto 1, settling into second off the start. He battled just outside the lead for the first six laps, before getting passed by two-time series champion Jeremy Martin and moving to third. Robertson held his own up front for half the race but ultimately dropped back to finish 10th. In Moto 2, he got off to a top-five start but he struggled to maintain the intensity as he continues to rebound from injury. With 10-18 finishes on the day, Robertson came away with 14th overall at the opening round.

“Just from not riding, my arms are not really in shape and my knee is a little sore but for not planning on racing, I’ll take it,” Robertson said. “We’ll keep building and the main goal this season is to make all 12 rounds, so thanks to everybody and let’s keep it going.”