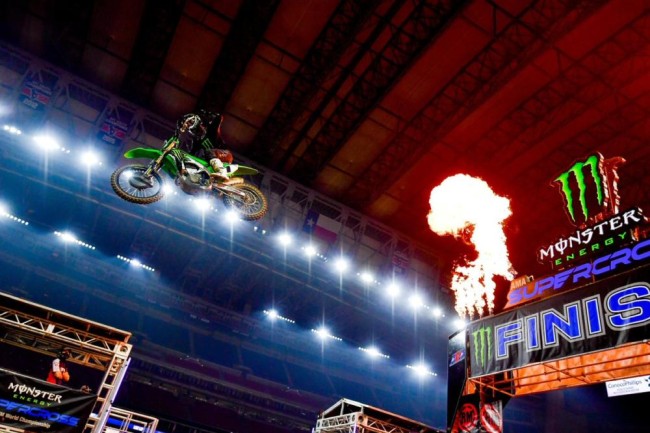 What a night of action in Houston – this one had everything!

Chase Sexton took the lead early with Adam Cianciarulo quickly onto his tail and the duo set about separating themselves from the rest of the field. But then it went wrong one by one. Cianciarulo was first to hit the deck after losing his front wheel in the sand then, a few laps later, Sexton got squirrelly coming out of the sand and lawn darted into the next jump and out of the race!

It was a shame to see as Sexton was flying but the mistakes gave a clam Eli Tomac the lead and despite some pressure from Zach Osborne, who then went down himself with a couple of laps to go, Tomac held on to take the win and rebound in style after a terrible start to the season with 13th in round one.

Tomac said: “Saturday was pretty scary for the points chase there, tonight there was no choice but to rebound and stay in this fight and that’s exactly what we did. The start was huge for us, I moved outside that time for the main and it paid off, I was able to sweep around the outside and came out second. The two guys were in front of me Chase and Adam, they were laying down the laps, burner pace, so kind of settled in I knew it would be a long, long race. Those guys both made a mistake in the sand and capitalised on that. “

The other big story was Dylan Ferrandis, the Frenchman was superb! Risking it all in the whoops to make passes into the top five Dylan then put the pressure on Osborne for second and was the glad recipient of the position when Osborne went down – this was the Ferrandis we expected in 2021 and he has positioned himself right there for the title, only two points out of the championship lead!

Justin Brayton just rode fantastic all night long to take third in his late 30s fir the Muc-off Honda team in a brilliant night for the Aussie team and the American rider.

Ken Roczen had a terrible start outside the top ten but steadily worked his way into fifth even if Cooper Webb fought his way back by Roczen to take fourth with the fighting Webb back for all to see – even if the raw speed isn’t there quite yet.

Justin Barcia also gated badly and was working his way up close to Roczen until he dropped back to tenth – and wasn’t happy about it! But he is still in contention in the points, just one point behind Roczen, thanks to the topsy-turvy nature of the first couple of rounds

In the 250 class Jett Lawrence holeshot and walked away winning by over ten seconds in a completely dominant performance from the sensational 17 year old. Rebounding in style from a sixth place at round one Jett showed everyone why he has the hype and why he has so much self-confidence – the Aussie is the next big thing in America!

Wildmen, Austin Forkner and RJ Hampshire, wiped themselves out while battling for second in a move that shows Forkner hasn’t matured just yet and is leaving the door open for his rivals to steal the championship from him.

Christian Craig didn’t get the greatest start but worked his way into second only to be passed by Colt Nicholls in the closing laps to end up third with Nicholls second, but Craig still leads the points even if Jett has now got all the momentum!

See the highlights below: