Ferrandis on his podium: I can’t believe I’m here! 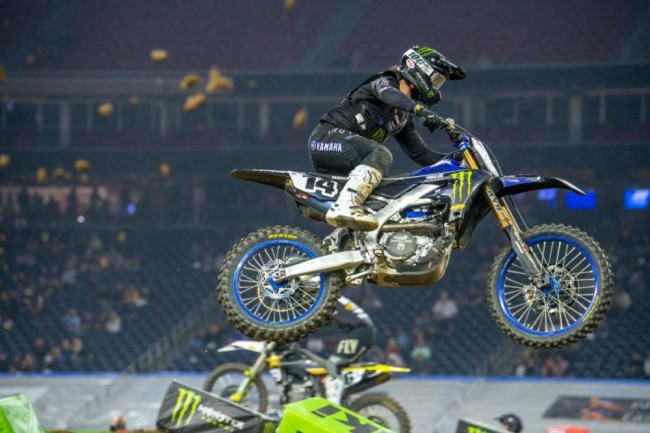 Dylan Ferrandis was simply astonished at getting a podium in only his second ever 450 supercross race, especially after missing a month of preparation in December with his broken hand!

The excited Frenchman simply could not believe he had done it and now sits just two points off the championship leader, Ken Roczen in a race that saw him move into third from outside the top five.

“I can’t believe I’m here, I’m not supposed to be here, I never expected that – it’s crazy,” expressed a disbelieving, fast-talking Frenchman on the podium. “When I watched the last couple of laps I was P3 and I was like, ‘dude, is that for real?! It looks like the hard work pays off, I never stopped working.

“It’s unbelievable, the first round it was just gnarly to be in the top ten in this gnarly 450 class, now to be on the box, it’s like ‘waow!’ I just cannot believe it. I’ve been working so hard with my team to get that bike so good, it looks like we did a good job and my trainer DV also who pushes me hard every day at the track and at home working physically – he was right! I ended the moto really well. It’s awesome!”

Now with a podium out of the way, and firmly in title contention will Ferrandis start to believe he belongs at the front and will he get even faster? He could be the man to watch from here on out!