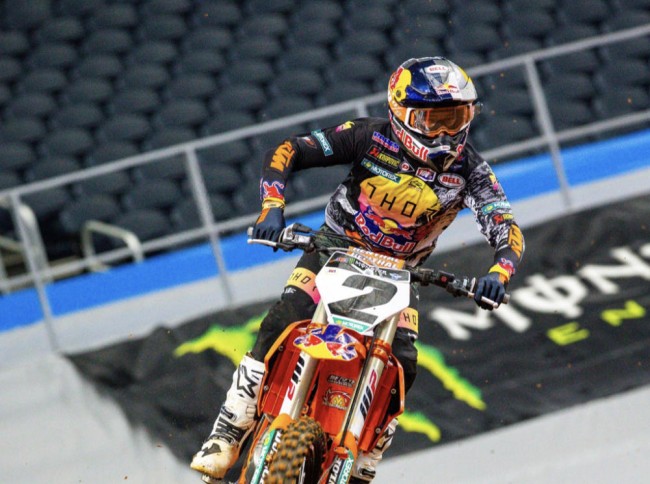 Execution under pressure. Cooper Webb delivered again when he had to! A great start in Arlington put him in second before he instantly pushed Dean Wilson aside for first and from there Webb controlled the race to take a huge win and the championship lead.

Webb said: “This is an incredible night. I just got a great start, it’s awesome. It was a huge night to get the red plate.”

Ken Roczen, after a crash in his heat race left him with an unfavourable gate, and Eli Tomac, were both buried outside the top ten with Tomac getting to eighth and Roczen only getting back to sixth to give Webb a seven point lead over the Honda rider at a crucial time in the season.

Roczen said: “Start position was key and I really messed that up in the heat race. On this track it was really difficult to make passes. It wasn’t really the night I was hoping for. One thing I have learned is not to be afraid of failing.”

Justin Barcia rode great for second while Jason Anderson barged his way into third hitting Malcolm Stewart out of the way then putting Dylan Ferrandis on the ground ending the fast Frenchman’s night in yet more frustration. Ferrandis had finally got a good start and passed Wilson to get into second until a mistake put him back battling for the top five and getting hit by an aggressive Anderson, who rode fantastic all night.

Seth Hammaker took a brilliant first win in his rookie season to underline his immense potential at the professional level. The cool, calm and collected 20 year old holeshot then let Jordon Smith make the mistake behind him to get into a four second lead and never be headed despite make a small mistake himself as the laps wound down.

“That was the longest race of my life, admitted Hammaker. “I was just trying to hit my lines clean. I got a little bit tired out there but I’m super stoked to get this win.” Hammaker looks to have something special and hasn’t been fazed once this year.

Behind him it was Hunter Lawrence who couldn’t quite get close enough to challenge for the win taking second but this was Hunter’s best result of the year and shows what he can do indoors.

The battle was on for third between the top two in the championship, Cameron McAdoo and Justin Cooper. Both got bad starts but McAdoo made his way through the field quicker only for Cooper to reel McAdoo in at the end then, in the penultimate corner, Cooper went for the pass only to slide out himself and leave McAdoo safe in third and extending his points lead to six over Cooper.