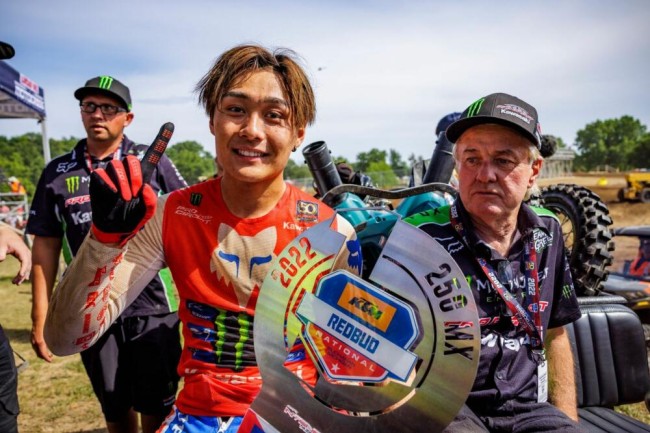 The Monster Energy/Pro Circuit/Kawasaki team quickly set the tone for the day as all three riders charged through the opening qualification sessions. Shimoda was clearly in tune with both track and machine as he logged the fastest lap (2:03.742) of the 250 Class to claim his first pole qualification. Meanwhile, Hammaker ranked ninth with a 2:06.226 and DiFrancesco showed his readiness to compete with the Pro Motocross elite by qualifying 11th (2:06.297).

At the start of 250 Moto 1, the rising Team Green star DiFrancesco was narrowly edged out for the holeshot with both of his teammates close in flank. A push of the front end in Turn 2, however, placed DiFrancesco on the ground and shuffled him to the bottom of the running order; the young rider had his work cut out for him in the race ahead. Meanwhile, Shimoda and Hammaker established themselves inside the top five with decisive moves on the opening lap. Shimoda raised the intensity to a fever pitch as he swiftly became the driving force in a three-way battle for the lead position. The No.30 KX™250 rider kept his main championship rivals under heavy pressure for the lion’s share of the race until he finally took command of the top spot with six laps remaining. Shimoda held true to form by maintaining his pace through the finish to claim his first moto win with more than a 20-second margin over second place. Hammaker logged consistent laps to hold onto a fifth-place finish while DiFrancesco turned heads with an impressive race from 32nd on the opening lap to 14th at the checkered flag.

The second 250 Class moto hosted green at the front again when DiFrancesco grabbed his first Pro Motocross holeshot in just his second start. A quick pass by Hammaker in the opening section of Lap 1 allowed the No.47 rider to take control of the lead from DiFrancesco before he lost traction accelerating out of Turn 4 and crashed. Further back, Shimoda found himself in 25th at the end of the first lap after a non-optimal start was worsened by a collision with another rider. DiFrancesco persisted with his sights on the leaders as the rookie held his own in the top five for more than half the race. While DiFrancesco gained vital experience at the front of the field, the crowd’s attention turned to Shimoda who was racing his way back into overall contention. The roars of the crowd followed Shimoda around the track while he passed multiple riders per lap, using creative line selection and relentlessly carrying his momentum through the pack. Despite his early race adversity, Shimoda clawed his way up to a heroic third place position to secure his first career overall win and made his mark in the history books as the first Japanese rider to grace the top step of the AMA Pro Motocross podium. After visiting the mechanic’s area to regroup from his crash, Hammaker made his way to 15th to salvage 11th overall (5-15) on the day and DiFrancesco finished the race with a respectable 12th place finish for 13th overall (14-12).

Jo Shimoda: “In the first moto, I started up front and had a fast pace going as I pressured the Lawrence brothers for the top-two positions. I was able to make a good pass into the lead and finished strong for the moto win. In Moto 2, my start wasn’t great and then I got caught up with some riders on the first lap which put me outside the top 20. I pushed hard the whole race to fight my way to third and earned my first overall victory. I had to race really hard in both motos, and it paid off for a great day.”

Seth Hammaker: “I made it a little tougher on myself than I needed to today but, my starts are improving and I just need to clean up a few things. In Moto 1, I had a pretty steady race all the way through to come away with a fifth but, I was looking to better that and get into the podium battle in Moto 2. Unfortunately, I lost traction at the bottom of the hill and fell just after passing into the lead so, I had to race forward from the back of the pack. It’s frustrating of course but, I will keep putting myself up there in the mix and keep improving to iron out those small mistakes.”

Ryder DiFrancesco: “I had a great start in the first moto but, a crash in the second corner put me way down the running order. I raced forward and made a bunch of passes to finish 14th. In Moto 2, I grabbed the holeshot which felt awesome, and I did my best to keep pace with the leaders for as long as I could. My goal for the day was to do exactly what I did for the first half of that second moto, I matched the speed of the guys at the front for as long as I could before getting tight and settling back a bit. I’m looking forward to Millville where I’ll try my best to stay up there even longer.”