Sebastien Tortelli interview: 1998 was an amazing year, for me my best season 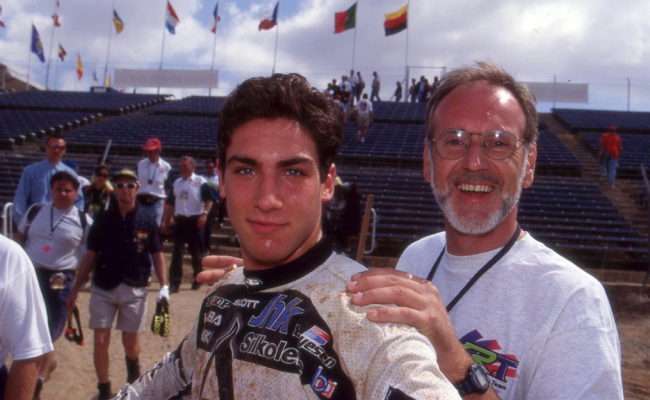 Sebastien Tortelli was a two times world champion with the Kawasaki Racing Team in the 1990s before moving to the USA. At Loket we met the amiable Frenchman, who is now back with his family living in Europe.

Sébastien Tortelli had a short career in the FIM World Motocross Championship, racing just four seasons from 1995 to 1998 after a promising debut in the European 125cc Championship the previous year when he finished second in the series with former world champion Jacky Vimond as his trainer; he entered just one GP at the end of that season to show his potential to the factory team managers.

“I raced my first GP in 1994, after the final round of the European Championship. It was in Belgium, and I got some good results there with good lap times, an 8th position after a very bad start in the first moto and a 4th place in the second race. Jan de Groot was there as a spectator and, when he came to talk to me, we immediately had a good relationship. He was more like my grandfather than a team manager in the end; we spoke a lot together and he took me at a very young age into his team,” recalled Sébastien, who then entered his first ever World Championship season on a 125cc Kawasaki. At that time Jan and Kawasaki were mainly involved in the 250cc class, but the legendary Dutch tuner convinced his partners to make an extra effort to help the promising young French kid. “I raced almost all of my European career with Kawasaki as I started on a 65cc Kawasaki, then an 80cc, entered the GPs on the KX125 and finally raced my last GP season on a 250cc Kawasaki in 1998. I stay four years with Jan and Kawasaki; I must say that some of my best career memories come from this period. It was like my second family, and it was a good reason to stay with Kawasaki throughout my career in Europe”.

After one learning year (1995) in the 125cc class and third position in the series, Sébastien dominated the class in 1996 and easily won his first title. After becoming the youngest-ever 125cc world champion in August 1996, he moved a few months later to the 250cc World Championship and clinched a further title during his second full season in that class. That year he had an epic battle with Stefan Everts, and finally beat the Belgian during the final round in Greece.

“1998 was an amazing year, for me my best season, with my best memories. We had some tough racing with Stefan, it was probably my toughest season. I’ve some great memories from a couple of races, but Greece for sure was one of the best, finishing the season on a high note. I was guided by Jacky (Vimond) and my parents before this race; Jacky lost a championship by one point and he really put that in my head. Whatever points you can get, you must never give up and that’s what I did,” explains Sébastien who left Europe at the end of the year as it was one of his dreams to race in America. “Jan knew for a long time that I wanted to move to the US; he knew that I love Supercross from the beginning. We signed a four year contract in 1996, which was very long at this time. I was only 16 but we had a lot of confidence in each other; he saw something in me and gave me a great chance with Kawasaki. He knew that SX was what I wanted to do, and already in 1997 I told him that whatever happened in 1998 I would move to the US.”

There was a strong relationship between Sébastien, Jan De Groot and his wife Ellen, as the Dutch manager and his wife considered Seb more or less as one of their children.

“Jan, his wife Ellen and Jacky Vimond all helped me to become a professional rider and a man, as I was still at school in Paris when I joined the team. Holland was not so far from Paris so I spent a lot of time with them, and they took me under their roof when I was there. I learnt a lot with them; they helped me to become a world champion. You don’t meet people like Jan anymore; for me there was a big hole when he disappeared. We still maintained a strong relationship when I was in the US; he was still close to me and I came several times to spend some time with him when I knew that he was sick,” he said.

After spending more than fifteen years in the US, Sébastien is now back in Europe, where he has some projects for the future with some motocross activities.

“At the end of last year I decided with my family to move back from USA and we now live in Spain, and I’m training some riders so that’s why I visit some GPs. It’s nice to be back in the MXGP paddock; it has been such a long time! A lot of things have changed in the paddock; it became very professional. It was already going that way when I left Europe; I think that the GPs look very professional and for sure it’s now very impressive to walk in the paddock with all the big trucks and the hospitality units. It’s been a big step forward!”

Watch Tortelli win the 250 world title in the final moto in 1998 after an simply epic battle with Stefan Everts all season long!