Searle on the podium again at Hawkstone 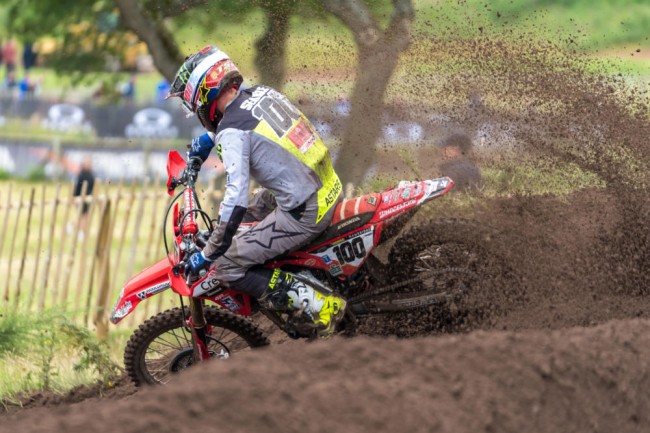 Just one day after extending his ACU British championship lead at the tough Foxhill track, Tommy Searle and the Crendon Fastrack Honda crew made the overnight trip to contest day two of the MX Nationals championship at Hawkstone Park – one of the most challenging circuits on the calendar. And the historic track was made more tricky by overnight rain.

Riders who hadn’t contested the first day at Hawksone were already at a disadvantage as they were not only out of contention for the overall – as scores from both days count – but pole position priority was given to qualifying from the first day. So Searle had an outside gate for the start rather than the preferred choice towards the centre.

But using the power of his Honda CRF450R, he got a great jump off the line and despite having to go around the outside of the corner, ended up in a strong fourth place. He quickly passed Martin Barr for third then battled with Harri Kullas for third. Searle couldn’t quite match the Estonian so took fourth.

Second time out Searle exited the first turn in sixth place but quickly made some decisive passes and moved up to third place. He tried to catch up to the leading duo but eventually brought the Crendon Fastrack Honda home in third.

Searle said: “I obviously raced yesterday so it’s been a long weekend of hard work. Especially as the rain had made the track tricky but the conditions ended up being pretty good.

“I got fourth and third and I felt better in second race. I seemed to take some time to warm up. Then towards the end of the second moto I ran out of steam a bit. There have been lots of races but now we have a few weeks off so it’s time to knuckle down for the last half of  the championships.”