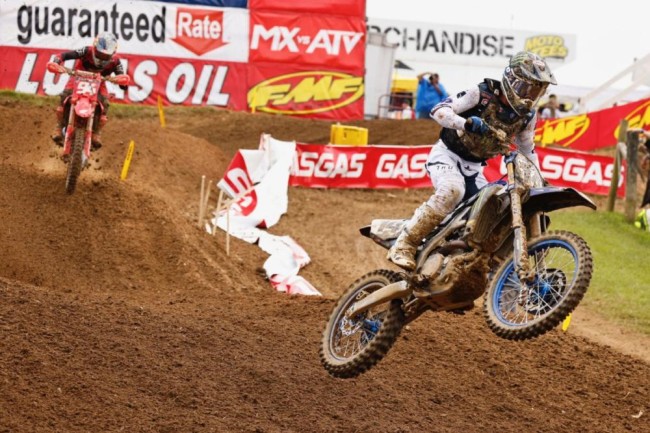 Dylan Ferrandis: This was a brilliant day for Dylan Ferrandis – even if he didn’t win a moto! Not bad but not great starts meant the Frenchman had to work his way past some top contenders and in race two he went toe-to-toe with Ken Roczen setting a pace that had them even catching a flying Eli Tomac! When Rozen made the pass on Ferrandis in that second moto, it seemed to light a fire under the Frenchman and he upped his intensity passing Roczen back and riding out of his skin to hold his title rival behind him. Ferrandis described it the race as a war after, but both riders embraced after the battle, mutually understanding what an intence duel it had been and both knew their pace was impressive! Ferrandis got the overall and the red plate to underline that he is in this title hunt for the long haul – and he wants it badly!

Ferrandis said: “It was a crazy day at High Point. I didn’t feel the greatest in Moto 1 but managed to finish second. I rode much better in Moto 2. I got a better start and had a big battle with my closest rivals in the championship, and finished second again. Getting the overall, and also to get the red plate back, is a dream come true.”

Ken Roczen: The German just looks so comfortable on this Honda and very much connected to his machine and the outdoors now! A fall ended his chances of a race win in race one but race two cemented Roczen as a title challenger and proved his fitness and he inner fight he has inside to win the title. Roczen came from 14th on lap one to get in behind Ferrandis and even make the pass as the pair charged to second and third but those opening ten minutes from Roczen was remarkable, he was on the gas but aggressive with it, reminiscent of how he rode MX2 in the world championship. There was no hesitation on making passes and even when Ferrandis passed him back Roczen didn’t get discouraged and kept fighting, he didn’t pass Dylan but was on his back wheel the rest of the race, forcing the pace as he showed everyone that his health and desire can’t be questioned this summer.

Eli Tomac: It’s been a game of hide and seek this outdoor championship for Eli Tomac but in the second moto Tomac finally found himself again! After an okay sixth in race one, Tomac finally got a start and finally showed the form and speed that carried him to three 450 motocross title in America. He hunted down teammate Cianciarulo, made the pass then put in a blistering lap to break AC and move to a ten second lead as Roczen, Ferrandis and Cianciarulo battled for second. Yes, Ferrandis and Roczen caught him in the last few laps and it meant Tomac having to keep his pace up but he did enough to win and might just have turned his season around with that win. Eli said that he found something with the bike and feels he now has the comfort he needs to make that win repeatable.

“This was a big one for us,” admitted Eli. “I’ve been in a bit of slump these last two races, so to get a win and feel like myself on the bike again is huge. After I got off the gate in Moto 2 and saw I had a good jump, I knew it was going to be a good moto. I was able to catch Adam rather quickly and once I was in the clean air, I rode my own race and started pulling away. This was an exciting race, and I can’t wait to keep this momentum rolling into RedBud. Thanks again to the entire Monster Energy Kawasaki squad for all the hard work this weekend.”

Jalek Swoll: There is absolutely no doubt this win came out of nowhere but you have to commend Jalek Swoll’s poise when it came to making it happen. He forced the issue on Hunter Lawrence on lap one of race one and it was the more experienced Aussie that made the mistake. Once his teammate RJ Hampshire gave him back the lead due to a bike issue, Swoll didn’t crumble under the prospect of a first race win, he continued his to get the job done and a achieved a momentous moment in his career. Now full of confidence, he backed it up in race two with another strong ride to take third and ensure the overall,. showing he knows how to take the opportunity when it arises. It would have been easy to relax after that first moto but he came back and delivered with the start, the speed and the determination.

“To get my first outdoor podium and kick it off with a win is amazing,” Swoll said. “Right now, I just want to build off this, keep it going and try to do it again next weekend. I was actually so tired but I just dug deep – I knew I could do it; I’ve put in the hours and training for this. It wouldn’t be possible without all the people around me putting in the hard work. I’m at a loss for words right now.”