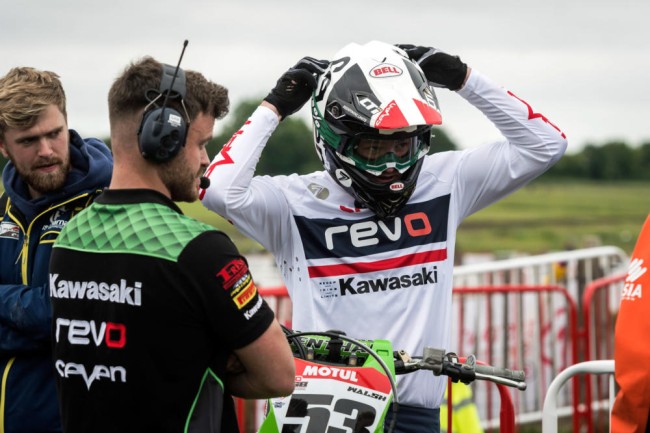 REVO Seven Kawasaki’s hopes of winning the British MX1 title suffered a body blow at Foxhill on Saturday when Dylan Walsh sustained a serious ankle injury in the opening moto.

He was chasing Harri Kullas for the lead with the pair three-seconds-a-lap faster than everyone else when, around half-distance, he clipped something with his rear wheel. The bike stepped out and he caught his left foot in a rut which twisted his ankle and put him on the ground.

Team Principal Mark Yates took him to the nearby Great Western Hospital in Swindon where an x-ray confirmed Dylan has no broken bones but serious ligament damage was diagnosed.

“It’s one of those things,” said Mark. “We went into Foxhill with a four-point deficit and at the point he crashed that was down to two points but now our championship hopes are gone. We’re trying to arrange a private MRI scan for Monday so we’ll have a better idea of the extent of the damage.

“The good news is that nothing’s broken but the ligament damage is pretty severe so he’s going to be out for a while.”

The injury means that the 23-year-old, who won the 2019ACU British MX2 title for the REVO team, will miss the MXGP of Great Britain at Matterley Basin this coming weekend.

“Dylan’s absolutely gutted because he wanted to win the MX1 championship to add to his MX2 title. I really feel for him and for the team.

“Dylan had caught Harri up and was weighing up where he could make a move. Harri was faster in some sections and Dylan was faster in others but I think he knew where he could have him and was biding his time. He was flying – him and Harri were three-seconds-a-lap faster than anyone else. They were doing 2:15s and no-one else was going under 2:18.

“Realistically, our title hopes have gone out of the window but Dylan was really showing his speed – although his pace has never been in doubt. It’s unfortunate but that’s the nature of the sport.

“There’s five weeks until round five at Blaxhall and he might be ready for that. We’re just going to go out and try and win what motos we can now the pressure of fighting for the championship is off.”

On a more positive note, the team’s second rider James Dunn continued his return to form at Foxhill with a pair of solid rides following two seasons out of the sport.

After completing the opening lap of race one in 16th he fought his way up to 11th at the flag and in the second 25-minute plus two lap moto he gated near the front and brought it home in seventh.

“I’m really pleased for James,” added Mark. “He had a comfortable first race and in the second moto he had a blinding start and ran in the top five for the first part of the race.”