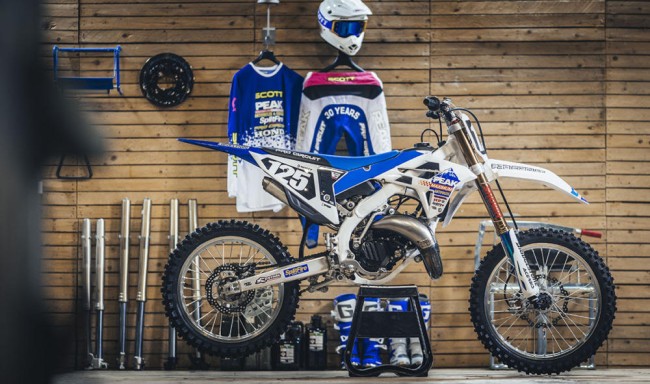 2021 marks the 30-year anniversary of the partnership between SCOTT Sports and the Pro Circuit Racing Team.

As part of our celebrations of the 30-year anniversary of SCOTT’s partnership with Pro Circuit, we thought we would embark on a special project to pay homage to the early days of the notorious, multi-championship winning race team.

When we launched our Prospect Pro Circuit 30 Years Anniversary Goggle, we wanted to realize a concept that represented the latest technology and performance combined with classic heritage style. We followed this exact same concept for our bike build project.

Working with legendary bike builder Andrea IL Rappa Rapaccioli (@ilrappa), we set out create a unique bike that not only looks amazing but performs on the track too. Based on the original Pro Circuit team bike, the 1991 Peak Pro Circuit Honda CR 125, this 2021 version features a similar look, but with all-new parts and configuration. We didn’t want to build a complete replica, but more a tribute to the original bike with a modern, custom twist.

Although this bike is very different from the 1991 version, we still wanted to keep the main structure true to the original. For this reason, we used a white Honda frame and of course a Pro Circuit exhaust system. When it came to the engine, we knew we had to keep it two-stroke. The most high-tech 125 two-stroke motor on the market today is the KTM SX engine, so that is that we went with. SCOTT grips were of course a must too! After that we let our bike-builders creative flow, and hopefully you will agree that the outcome was a real work of art.

What’s the best part of any bike build? Getting it muddy! Of course we couldn’t build this beast and not take it for a test ride.

We would like to take this opportunity to say a big thank you to the Mitch Payton and the Pro Circuit team for 30 amazing years together and we look forward to many more years of racing to come.