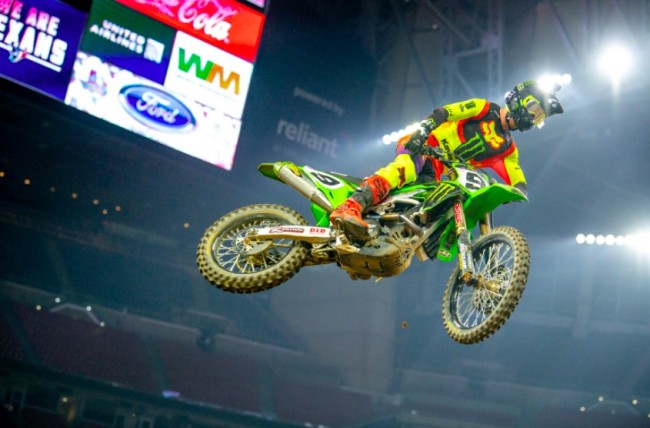 After the crash that ended his hopes of a win at H2, Adam Cianciarulo rode a smarter race in H3 to settle for a podium once the top two started to get away from him. AC is just nine points of out of the lead despite the crash at round two – but the American is still struggling slightly with his arm

Here is what he had to say about his night and first podium of the year in the press conference.

Arm is better, I think. It’s weird, just depending on the track sometimes it’s worse than others and it affects me more. I’d be lying if I said it didn’t affect me still a little bit. Obviously tonight it was good enough for a podium. To be honest, coming into this season, as Cooper [Webb] alluded to him not having a great off-season, I was stressing it hard coming in. The field—everybody knows how stacked the field is and how high the level is. For me, I did not get a chance to really ride and kind of build and work on some of the things I wanted to work on. I think I did two 20’s going through the whoops before the season started. I definitely have felt a huge improvement just from race one to now. So, very excited with kind of the direction we’re trending in. Like you said, it was a pretty stress-free night for me. Got some good starts and rode well. I don’t think I did anything too great out there. Obviously, Ken [Roczen] and Cooper were able to put some time into me there at the end. I just was riding smart and happy to bring it home.

There’s a lot of racers that are dealing with something. As racers, we’re always kind of nursing stuff here or there. But for me, my philosophy is just no matter what the variable is, if I suck on a specific layout of track or I’m not gelling with the bike that day or my hand hurts and I can’t hold onto the grip, I just try to do my best every time no matter what that is, even if that’s not as good as the best guy. So, I find in my career in times where I’ve gotten discouraged and dwelled on things and ultimately not did my best, that’s when I go home and I’m like, “Damn, that was a crappy day.” But when I leave it all out there no matter what, I can rest easy at night. So, I’ve tried to learn those lessons early in my career and now later in my career just give it everything I have, regardless of any circumstance.

We got a decent amount of testing in. Nothing too extensive. We did make a pretty big change; I think for the second qualifying session at Houston 2. Ever since then I feel like I’ve been riding a little bit more back to normal. So, I’m feeling really good about where the bike is at. Like I said, I have Oscar [Wirdeman], my crew chief, and my mechanic, Justin [Shantie]. The whole team is very knowledgeable on that stuff. So, it’s super cool for me to be able to lean on them. No big complaints for me. We’ll always be tinkering. The bike is always evolving throughout the year. As of right now, no 911 calls happening.

Yeah. I think the conditions were honestly more or less the same. The dirt had the same feel for all three. I honestly think tonight was probably the most firm it’s been. Some of the 90 degree turns, the moisture was definitely coming up in the main event. I was being cautious there when I was leaned over. But it’s been a pretty good test. I think it’s been really chaotic because of the short lap times and tonight we had the short, right-handed start. So really just a chaotic start to the season. Like you said, kind of guys all over the place. I went 4, 12, 3 and I think I’m nine points back, so pretty dang good considering. I’m just excited to get out of Houston and go ride some different dirt, to be honest with you.