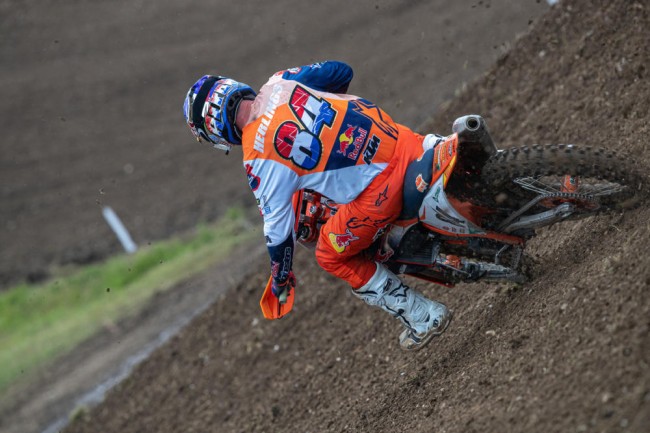 It hasn’t been the jaw-droppingly fast Jeffrey Herlings of a couple of years ago, but under the context of two-injury riddled seasons that culminated in a broken neck and temporary paralysis last year, Herlings being on the podium in the first two Grand Prix of 2021 and not far off the championship lead in second, has to be a quiet success for the single-minded Dutch rider – even if not being the fastest will frustrate at some level.

We caught up with a very open and honest Herlings to discuss his British GP and his view on how things are going so far this season:

Jeffrey, you look pretty patient (so far this season) even when Gajser (or whoever) was passing you , you weren’t panicking. Is this something you have worked on?

Getting enough injuries – that helped me! (laughs) I know it’s a long championship and I know I am not where I need to be right now. I know I still need to improve and get better and better and know that when I’m 100% Jeffrey Herlings again I can match that guy’s (Gajser) speed but right now I’m not there yet. I’m just off and I can’t match the speed average, not in Russia and not here, but hopefully I can have something for them in a few weeks, I will be trying. Normally I always was faster in the past but now he is faster than me, today he was just in front of me in the second moto and he gapped me with like 15 seconds or maybe 20, I don’t know exactly, he was fast and he was good. He has a lot of confidence right now, for now I am too slow but need to improve.

Did you feel a bit stronger this weekend than Russia?

I felt a bit better, still I was off but I felt better. I like this track a bit more than the Russian track so I think we will get there eventually. This is actually one of my favourite tracks but today it was a bit sketchy, it was really super-fast then it was a little bit slick on a lot of take-offs because of the rain, so I was just a bit off. Hopefully once my my kind of tracks are coming, Oss is coming soon, Lommel, Kegums and those tracks, hopefully I can have more for Tony , because also Tony was faster than me in Russia and also today as well. I’m not just dealing with one guy, I am dealing with two guys right now.

I was talking to Dirk, and he was pretty calm about your situation and happy with your positioning in the championship, are you of the same mentality?

I think it’s important just to be at all the races, that’s most important and to be consistent. It’s proven in the past normally when you are on the podium every single weekend or close tot he podium you are close to winning a championship. Especially in this field, there are so many guys who can win and are strong. Coming back to it once again, I know I am a little bit off right now but I know my team is there, the bike is absolutely great, it’s proven this bike so it’s just me as a rider who is a little bit off but we will keep working to match those guys speed hopefully soon.

Injury-wise do you feel healthier and are you able to enjoy the sport, the training and the battles more this year?

Definitely, I take it a little bit less serious than i was in 2018 when I was dominating for example. I’m training a little bit less but doing it like this I could do it for multiple more years. if I train like 2018 and being so aggressive on the training and strict on myself, it’s hard to do that for many, many years.

This year I eat some candy bars sometimes and on a day I feel really tired, I don’t go riding but also you see in the results I take a little less risk but all in all that’s maybe just the difference between finishing first and second or third. In Russia I was second and now I’m third. Yeah, we definitely have to try to step it up.

And the training with Aldon Baker, I think you took inspiration from him in 2018, but a lot of his guys retire early so do you take any of that on still or have you adapted it so you can still be happy?

I try to take a little bit of both. Some riders really enjoy racing and come to the GP for multiple days and training a little bit less and that’s why they have a long career. While in America, guys you see like Villopoto and Ricky Carmichael, those were the top, top guys and they were super strong and won so many races but they had a pretty short career. Not even injury-wise, like Ricky didn’t have too many injuries I would say, but just because it was so intense. And even racing in America with so many races throughout the year, it’s really intense anyway so to do that program it’s tough on you. Now I think I have a good mix but still, I need to increase my speed a bit!

I told so many people even Russia, I was so surprised, I never thought he could pull off what he did there. I thought maybe it was a one weekend thing but again this weekend he’s so strong. I can just say huge respect, I have huge respect for this guy. He’s 36 in a few months and he is still on of the fastest guys in the planet! To do what he does at his age and racing so many years already, I think everybody should give a lot of respect for this guy because he really deserves it.

Listen to our review of the British MXGP on iTunes, Spotify or YouTube: