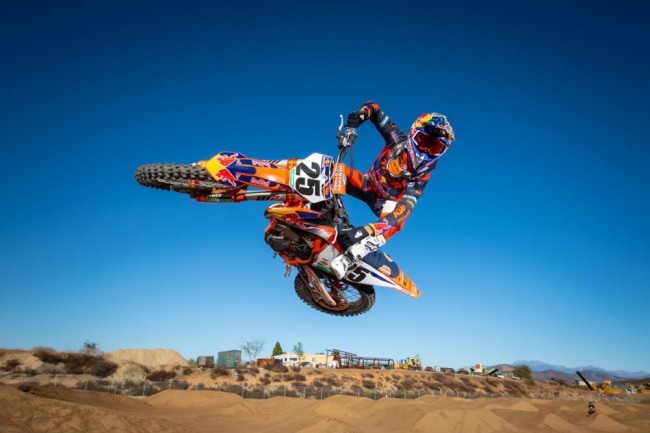 Coming into 2021 with the hype of fellow Frenchman, Dylan Ferrandis, arriving into the 450 class plus Roczen, Webb, Tomac and Cianciarulo along with the momentum of 450 US motocross champ, Zach Osborne, it’s easy to overlook Marvin Musquin as supercross title contender.

The reality is the Frenchman has always been there or thereabouts for a title challenge but missing last season with a knee injury means Musquin isn’t really in the conversation as a potential champion now in many people’s eyes. It is probably the first time in years Musquin hasn’t been seen as one of the top three or four riders but when you miss a season and everyone else makes progress, then you have another highly touted but younger Frenchman coming into the class, it leaves Musquin as the forgotten man with the growing the assertion that maybe his window of opportunity is shutting as he enters his 30s and a decade in the US.

But it may be a bit early to write Musquin off. Marvin did come back fairly strong outdoors following his knee surgery but he had inconsistency in some motos with the Frenchman admitting he wasn’t quite where he needed to be to make the title challenge moto in moto out.

The question is, has he found the level he needs over the winter to get his body and his mind back to competing against Webb, Tomac, Roczen et al week-in, week-out? On a purely talent level, Marvin has the bike skills to do it, but even in his prime years he seemed to struggle with producing under pressure when he really needs too and now he is coming in without a supercross race under his belt since 2019.

He might even have to prove to himself he can still be a race winner and title contender. Musquin is a nice person and a humble man and sometimes in the big moments that just might count against him. However, under the politeness and friendly demeanor, Musquin is determined and if he can get his confidence back and some strong results early, I wouldn’t rule out Musquin from at least being a contender once again.

It won’t be easy after missing a full season and the extra competition in the class from when he last raced 450 supercross not least with a teammate called Cooper Webb who essentially pushed Marvin out of the number one rider in the team. The American has already won a supercross championship leaving with the team and now everyone at Red Bull KTM views Cooper as the main man on the team despite Musquin being there for his entire career, with Pit Beirer telling us, “he (Cooper) will be the leading guy from our crew to go into the 2021 season.”

There is no doubt Musquin has an uphill challenge this season to re-establish himself thanks to his struggles in 2020 but he is up for climbing the mountain again.