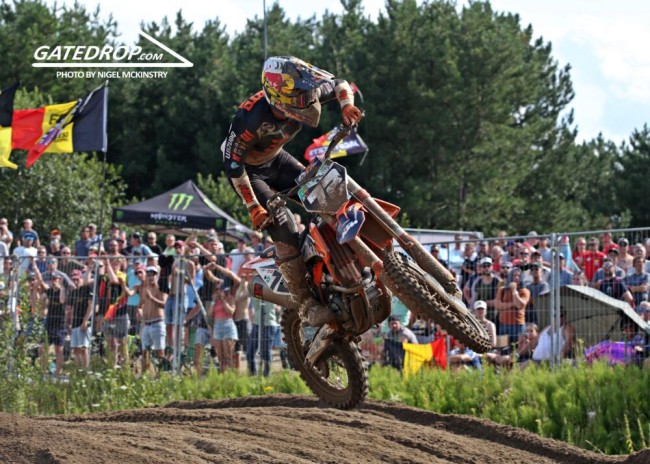 What a brutal Grand Prix. It doesn’t get any tougher than racing Lommel for two days in 30 degree heat and the bumps were so big that even Romain Febvre was taking photos of them!

But at the end of a fantastic weekend packed with noisy fans and array of international flags and flares, it was the sand masters on top!

Three dutch riders on the podium in MXGP, Kay de Wolf second overall with a moto win and Roan Van de Moosdijk back in action and leading the opening moto with fantastic speed, even with now confirmed absence of Jeffrey Herlings the Netherlands have a ridiculous array of talent to choose from for the MXoN!

Amazingly, it was Bogers v Vlaanderen in both races on Sunday for the overall and that is exactly the decision the MXoN team manager is likely to have in the next couple of weeks, and with two laps of go of the final moto on a track that had everyone just in survival mode, Bogers found his flow, and some amazing lap times to make the key pass on an exhausted Febvre to take the overall win off Vlaanderen as Coldenhoff, despite illness during the week took the moto win!

Bogers first moto ride was sensational and he made it look easy such was his flow but having that speed and guts to dig deep to win his first GP in race two was just as impressive. Not many predicted he would win the overall but for Bogers and Standing Construct this was the stuff dreams are made of, winning the toughest GP out there.

Even the podium riders were exhausted and needed more time in the wash tents behind the podium to sit down and recover with as much water as possible before they climbed the steps of the podium. This took everything out of every single rider on the track first or last.

Jorge Prado had a very tough day coming home with a 9-10 after leading both motos, after moto one Prado and his father had a discussion, neither looking happy with the situation, but the young Spaniard was absolutely spent and still had to trudge across to get his holeshot award before getting back on the bike. Prado has never found the heat easy but his speed and style in the first five minutes was there but mistakes aren’t something you usually see, but he just didn’t look comfortable throughout either moto once he lost the lead and his rhythm.

In MX2 Jago Geerts took a big step in his world championship hopes and his second moto win demonstrated his fitness and determination to win this title, Geerts mental strength under pressue is big improvement this season and he is delivering when it matters. Kay de Wolf meanwhile was utterly spectacular all weekend with his speed and style especially over the sand whoops riding on the back wheel and keeping the front wheel high, jumping bumps mid corners that most other riders couldn’t get as clean if at all, de Wolf was the most exciting rider to watch and he deserved his moto win, a truly special talent.

Liam Everts was having one of the best GP motos of his career in race one in front of a vociferious home fans as he passed Laegenfelder and Benistant in one go as the trio went at it bar to bar through the sand, But just as he was settled in third and untimely crash cost Everts and he ended up fifth with another crash on lap one of race two leaving Liam coming from behind to seventh and “kicking himself” as he missed his first podium by only two points. But the speed was the there and he looks like he really believes he is one of the main guys in the class, underpinned now with a factory contract in his hand for 2023. Liam Everts is coming of age and is now a legitimate contender in MX2.

One of the most pleasing things of the weekend was seeing Harry Everts in the pitlane during moto one as he watched enthusiastically every move Liam made, walking from side to side with stopwatch in hand and fist clinching and cheering when Liam made a pass. Harry has seen it all but it is clear he is loving watching Liam’s increasingly rapid progress in the sport.

Poor Simon Laegenfelder. He did everything right all weekend until the last couple of laps of the final moto and the rapid German hit the wall in the heat and crashed three times losing his podium but the speed and poise he had until then was impressive and Laegenfelder has really risen to the occasion recently whether it’s Indonesia, Loket or Lommel, and is becoming a complete rider in all conditions.

Roan Van de Moosdijk impressed as well in his first GP since Argentina, speed wasn’t an issue and word was he was faster than Geerts and de Wolf in testing leading into Lommel. His early speed and lead in race one underlined the level Roan can ride at but he did admit to missing that race intensity.

After all that it was Tom Vialle who emerged in third at the end of a very rough weekend for the French rider who also confirmed he will be racing in America in 2023! Vialle didn’t look comfortable all weekend, made worse by having last gate pick in the Sunday motos due to a DNF on Saturday but a crash at the beginning and end of race tone restricted him to seventh although he did some decent damage limitation in race two for fourth, taking advantage of Laegenfelder’s crash. He kept his title hopes alive but now Vialle needs to go on a winning streak or push Geerts into a mistake, the last four rounds will be fascinating.