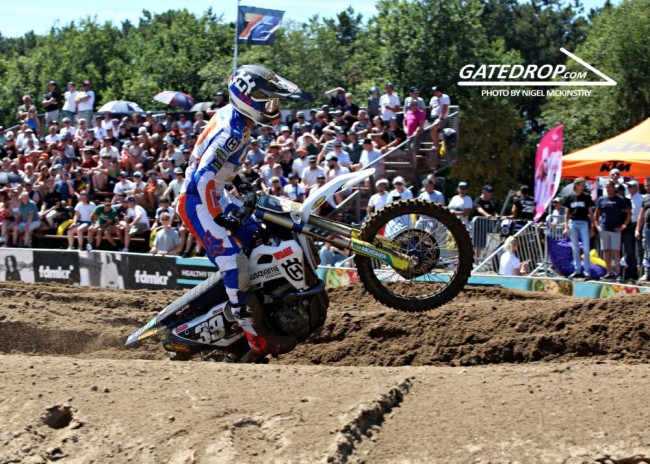 Roan van de Moosdijk made a really impressive return to Grand Prix action at Lommel, his first GP since round three in Argentina, to lead the opening moto and come close to a podium on the toughest track on the calender.

We caught up with the Roan to get his thoughts on a strong performance after a bad injury and long lay-off.

Roan, you are back in the Grand Prix and a pretty impressive day at not an easy place to come back to with the that heat and the bumps! How do you feel about it?

I feel good, like you said, toughest GP of the year to back too! I had two good starts and snuck around the inside. The first moto I led some laps but you know, that intensity at the beginning is unbelievable, you cannot practice for that during the week.

After halfway I was already quite empty and then I survived! I tried to pick up the riders who passed me (pace) but I was quite smoked! Still finished sixth and second moto the start was a little bit less but I knew if I went at the beginning we can make a gap then I could bring it home. So I did that and finished really close to being on the box so overall really good comeback.

Yeah, there was a lot of you within a couple of points of getting on..

Yeah, I didn’t know so definitely good and I’m looking forward to Sweden.

I’d heard you were really fast in the week, faster than Geerts…did that give you confidence coming here? As you said the race intensity is different but you must have been feeling good coming in?

Yeah that’s true, there was like a mini GP in Bergham on Wednesday, I saw the laptimes but anyway, I knew the intensity in the race would be different. I know my speed is good I just need to have some race rhythm.

How difficult was it having that crash (in Argentina) obviously the pain isn’t a good thing but also for your season, your career with a new team, was that difficult mentally?

Yeah, because this is my first year completely as a factory rider and then to get hurt at the third round was really disappointing. But I want to give everything next year and show what I’ve got.

Dutch riders are 1-2-3 in MXGP, Kay won and you probably had the pace for a podium, what is going on with Holland? Why are you producing so many good riders?

I don’t know actually! In MXGP it was like a Dutch Masters, just a local Dutch race. I don’t know, it’s a difficult question, we grew up here (on sand) but we are also good on hard pack. It felt really good that the Dutch and also Belgian guys as well.

Next year you are staying MX2 but it’s your last year, so is that a pressure year for you? I think you would be good on a 450 anyway but obviously it’s getting a ride!

A little bit of pressure yes, becuase I need to show something next year but I think my body is made for a 450 because I am quite big, so we will give everything next year.