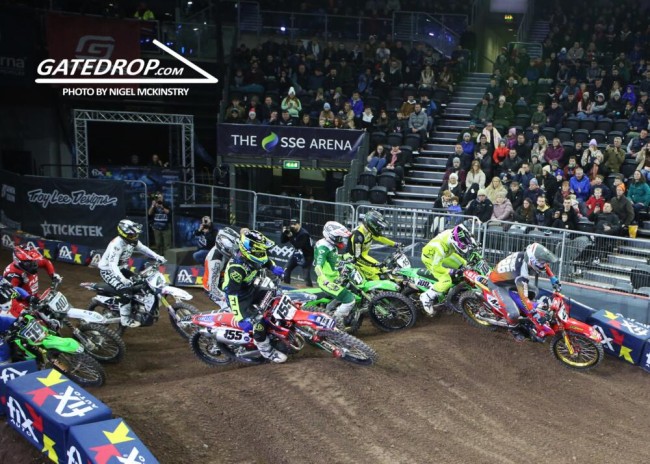 The British Arenacross series kicked off in style in Belfast with two nights of racing in front of a packed stadium and British stars showing their indoor skills.

The decision to be British only certainly worked with high status riders like Tommy Searle, Shaun Simpson, Jake Nicholls, Conrad Mewse and Josh Gilbert facing off alongside indoor specialists Joe Clayton, Adam Chatfield and Jack Brunell. Names the crowd recognise, former GP winners, former and current British champions alongside local men, Martin Barr, Jason Meara and James Mackrel. Barr and Meara doing superbly on Friday night, going 4-7 in the main event respectively. Barr even had a late shot at the podium with Gilbert in his sights, giving the local crowd excitment until the end.

The racing was good, the battles intense, but there was a certain respect the riders had for each other, with take-outs generally being avoided, with some riders maybe wishing they had made a harder move! The vibe in the pits was friendly but when it came to main event time, the focus was there, the likes of Searle and Mewse doing their own individual warm-ups, very focused and preparing for the impending battle ahead.

The big stories on Friday were Tommy Searle’s perfect night with the reigning British outdoor champ looking flawless from practice to the chequered flag, Searle looks right at home on the Kawasaki, and ready to fight for every title. On the other side of the coin, the crash between Joe Clayton and Jack Brunell while battling for the lead in the heat race, will be imprinted on everyone’s mind, such was the violent and sudden nature of the explosive mid-air contact.

Clayton got landed on and flung to the other side of the track while Brunell dropped out of the air like a stone. Both were sore but thankfully and somehow not badly injured. Brunell coughing up blood and away to hospital but raced the next day as Clayton somehow ran away with the next heat before falling in the main. Clayton though admitted Saturday was hard dealing with the pain of Friday’s crash and he just failed to make the main with some bad starts. Both riders were on pace on Friday to win and should be contenders again this weekend in Aberdeen.

Saturday night and it was roles reversed with Searle and Mewse. Conrad almost caught Searle in the backmarkers on Friday but this time he had the inside gate on Saturday night and he made sure Searle didn’t get the holeshot with some contact in turn one. Mewse then exploded into life with some rapid laps right off the bat to pull a lead. By the time Searle got into second, he had ground to make up and the duo set a pace no-one else could match.

They were going so fast that Mewse came into a pack of backmarkers battling for fifth, all involved in an amazingly intense race themselves with passes on nearly every corner. That meant Mewse was effectively walking through a minefield and with no blue flags, the riders didn’t know Mewse was there, as evidenced when Bayliss passed him back thinking he was part of the multi-rider battle! All that time, Searle was closing in and by the last lap it was tense until Mewse took the chequered flag – not actually realising it was the last lap, after being so focused on getting by the backmarkers!

Searle and Mewse are the class of the field right now but by Saturday morning practice you could see all the riders much more aggressive on track as they got used to tight confines of Arenacross. Aberdeen should be more of the same as the riders get used to the Arenacross style of racing.

A special mention too should go to the head-to-head races, always entertaining and a mix of chess, shoulder barging contact, and attempted take-outs, although more polite than previous years! Jordan Booker and Josh Gilbert having a sensational final on Friday, although Dave Thorpe’s heart rate must have peaked like it was the 1986 final round World 500 championship battle when Gilbert nearly went over the bars in the whoops in a final desperate attempt to overhaul Booker who had put the hit on him in the previous turn!

It was a similar story on Saturday with Clayton just not able to find his way by Luke Burton who knew exactly where to block in every turn. Jason Meara had earlier got one of the loudest cheers of the night after he put down his rival to win his opening match-up in the penultimate turn!

All in all in was a great two nights of racing, and with the youth racing putting on a good show as well, it is a perfect series to give British talent the chance to develop their indoor and technical skills and some much needed high level winter racing across the UK before outdoor begin in the Spring.