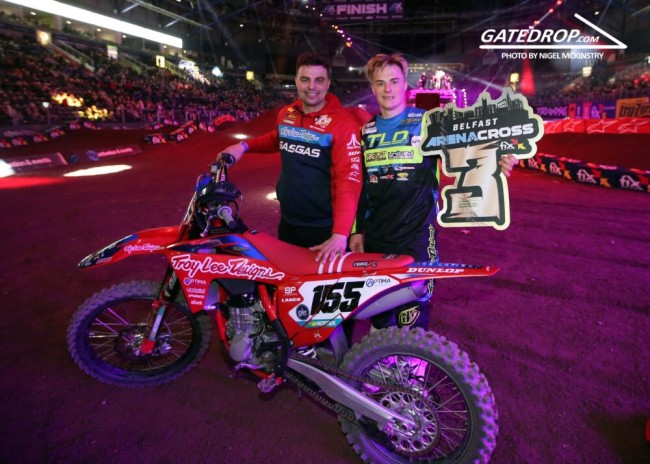 It was an eventful start to the Arenacross UK series for Jack Brunell who had two very different nights. At the opening round he was battling for a heat race win before a race incident between Jo Clayton with Brunell ending up worse. The ASA United GasGas rider headed straight to the hospital but he’s a true battler and was back out racing on Sunday!

He was able to dust himself down after a difficult opener but put it right in the second night of racing coming home in third and perhaps he could be the one rider to get close to Searle and Mewse when he’s fully fit.

We caught up with Brunell to discuss his opening rounds of the British Arenacross series.

GateDrop: Jack, a crazy couple of nights for you here in Belfast. After that crazy crash on Friday to end up third on Saturday, I am sure you’d have snapped someone’s hand off for that so you must be happy with how it ended?

Brunell: Yeah, I am happy with how it ended but I came into this series to try and win. I feel like I should be winning but with the accident I had last night with being in hospital until 2 o’clock having a fractured rib and a bruised lung doesn’t help the situation. I managed to get a podium tonight – Tommy and Conrad, unbelievable rides and fair play to them.

I think even if I was on top form, it would have been a good race but I am happy to finish the weekend in one piece again, really. Well, not in one piece but to be able to race after the nasty crash on Friday. I want to say a massive thanks to CS Sports, Mark, Lee and obviously everyone that has supported my programme to try and get the win. We started off obviously with a bad one but finished with a good high. We will head to Aberdeen and hopefully get some more podium results throughout the series.

GateDrop: You mentioned there you were riding with a fractured rib, what was that like to ride with – some pain or where you able to battle through it?

Brunell: The pain isn’t too bad. I mean I raced with a fractured tibia and fractured radius when I was racing in America after like a week. I can deal with pain and I was happy I could ride the bike without feeling too much pain, it was just the breathing part of it where I bruised my lung, heavy breathing and I had a stitch on the back too but got it done mate and really happy to get away with a podium. A little podium for the team is a great start and we will just build from there. 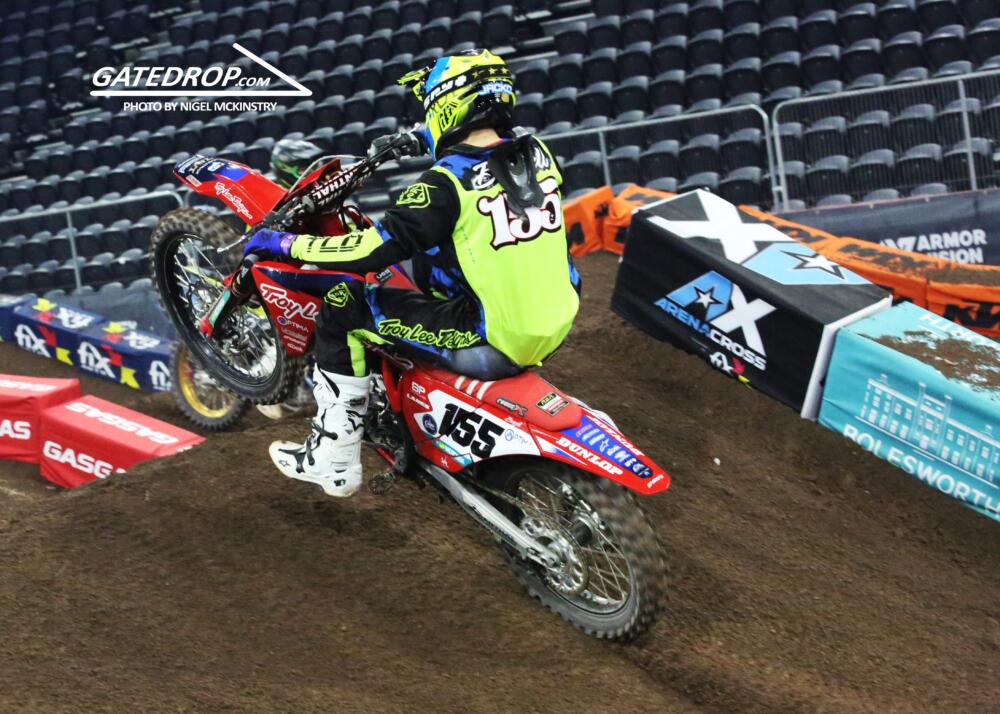 GateDrop: Arenacross has obviously been away for three years but it’s back which is great and back with a bit of a change as it’s a British Championship. For the British industry I think it is a good move, is that something you are positive about?

Brunell: Yeah, unbelievable mate. I’ve always said that it should be all about the UK riders. The faster young riders obviously look up to Tommy, Conrad and us guys so hopefully this can help to bring them through. I hope we can bring some of the fast up and coming British riders to bring them through and do World Supercross races like I do. That’s what the goal is to just bring everyone along and get them used to Supercross because this is the future. Matt Bates has put on an unbelievable show with two sold out nights here in Belfast, it’s unheard really so hopefully we can continue to keep selling out the whole way through and then keeps growing from there really.

GateDrop: What was your thoughts on the track here this year? The dirt hasn’t been too good here in the past but I think it looked better this year…

Brunell: (laughs) yeah, it was like gravel. I have gravel rash the whole way down one side where I crashed yesterday and also a rash down my arm where I crashed earlier. It’s not good for obviously falling off but apart from that it held together. It is always the same here but I am looking forward to the other races and moving on from there.

GateDrop: Have you any plans to ride before Aberdeen or will you just rest up after the big crash?

Brunell: Yeah, the van just goes from here straight to Scotland and will stay there but I’m hurt anyway so I will just rest up and get ready for next weekend.

GateDrop: What’s the goals for the rest of the Arenacross UK season?

Brunell: Top five, podiums and just try to do everything I can to stay up front.