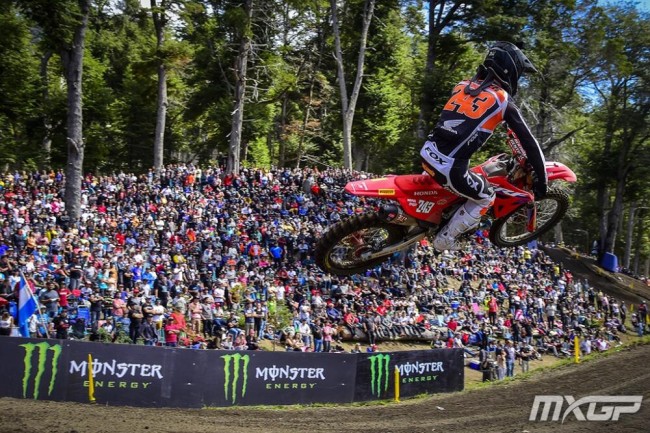 Argentina is a wonderfully spectacular and fun track until you get it wrong – then it can be painful! That was the lesson on the fast, flowing but deceptively hard pack/loamy ground over the weekend that saw Brian Bogers, Kay de Wolf, Roan Van de Moosdijk and Gianluca Facchetti all leave injured. Get well soon to all, injuries are the most frustrating part of this sport – especially when all four were on good form.

The enthuaism of the fans and beauty of the circuit underlined why the world championship needs to go beyond Europe but only 15 or so regulars also underlined that there needs to be more riders and teams given financial assistance to get there.

Surely at least the top 20 or more in each class have to go as that’s where the points go down too? Yes, injuries haven’t helped and neither did the injuries at the event but even for the local men participating and the fans getting to see their heroes, more GP regulars are needed to show the depth of field and quality of competition the premier motocross series in the world possesses? To have the level of rider like Calvin Vlaanderen and Alex Lupino not present, isn’t an ideal optic.

Aside from that, the racing was still pretty good! Renaux took a tense first moto win with Gajser on his tail in a very impressive ride that shows he feels he belongs at the front and that he can deal with pressure. Coming through the top five in race two also shows he can work his way past some fast guys – and this was all while carrying an injury sustained in between round two and three! Renaux is the real deal on a 450, is up to second in the series and is knocking on Tim Gajser’s door – but Gajser isn’t letting anyone in at the minute!

Three moto wins and three second places mean Gajser is in control right now – and it looks like he has more if needed. Tim is a class at right now. Someone needs to stop his momentum quickly or he will runaway with this championship.

Jorge Prado will have even more urgency to do so in Portugal after a unusually below par ride in Argentina. The Spaniard looked stiff on the bike all weekend and admitted he wasn’t riding well nor was he happy about it. It’s not the end of the world as he is still on the podium but the last three motos have been unexpected and costly in the points especially coming after two moto wins – and those starts aren’t quite as bullet proof either in terms of consistent holeshots. The best of Jorge Prado is still to come.

Pauls Jonass showed some sensational speed all weekend and it’s great to have the Latvian back and immediately on race-winning pace – it’s such a shame he’s he had the arm issues otherwise he could be knocking o the door of that top three in the series. A win in the opening moto to back up his qualifying heat win was looking likely until that crash.

Ruben Fernandez recovered from spectacular crash in race one while leading to take third off Prado on the final lap making two MXGP rookies in the top three in race two – MX2 is producing the talent!

Talking of MX2 and talent, Jago Geerts and Tom Vialle set a bliistering pace on their respective 250f machines. They were, especially after unfortunate crash of Simon Laegenfelder and scary crash of Kay de Wof, on a pace all by themselves and the intensity and determination to win was impressive.

Geerts is a new man this year, cold in the mind and efficient on the bike, he took a brilliant first moto win decisively passing Vialle to take the win late in the moto. Vialle reversed the game in race two to underline his determination that is sometimes hidden underneath that smooth technical style but Vialle wants to win badly – really badly.

Mikkel Haarup was the big mover and shaker in MX2 getting his first podium of the year and moving up to third in the series. It’s been a strong start to the year for the new Dixon Kawasaki rider and he is beginning to harness that raw speed with consistency. Kevin Horgmo too was showing great speed but a couple of front wheel wash outs hurt his overalls score – but the pace was there for top five or better, it’s been a superb first three rounds for Horgmo in his return to MX2 and he looks fantastic on the F&H Kawasaki.

Who had the best gear? That was easy, Jeremy Seewer’s Argentina Maradona kits was superb!

Three rounds in and things are starting to get series now with the championships taking shape. Portugal is next and, if anyone wants to disrupt Tim Gajser in this championship and wrestle his momentum away – winning at Agueda is a must!