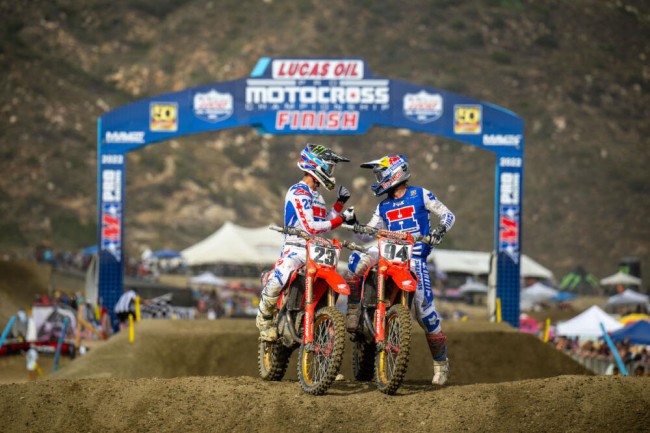 For Honda especially, with their 50th anniversary year, in their throwback kits and and bike graphics, it simply could not have went any better. The kit’s looked fantastic especially Roczen’s Fox gear that looked just like Rick Johnson in 86, with the man himself on commentary to see it all unfold alongside another Honda legend, Jeremy McGrath. The commentary was superb but RJ’s comments on Tomac evolving the sport by standing up more in corners was pretty perplexing since Everts had been doing it at least 20 years and taken on by the likes of Cairoli, Herlings and Roczen. In fact from my perspective I have noticed Tomac has actually has stood up more since seeing Herlings and Cairoli do it at the Florida US GP.

On the racing front, Sexton and Roczen were in a class of their own. Great styles and technique and for Sexton to do that wasn’t as big of a surprise but for Roczen this was a brilliant way to come back after wondering if he would ever race again!

Sticking to comeback’s and Ryan Dungey looked like he had never been away, great starts, matching the intensity and taking fiffth overall after five years away, he probably has to go down as a title contender now!

For Cairoli things were tougher. He’s 36 now, and maybe all of us didn’t quite believe he hadn’t been preparing for too long but he was being honest! Only one 30 moto done before the season opener, switching frames to the US frame with no real testing created a bike that, watching, he never looked comfortable on and somehow he still emerged with 7th overall despite a crash in race one that dropped him to tenth with Cairoli admitting he was just, “cruising.”

This was probaly the least Cairoli looked like Cairoli in 17 years but it is testament to his briliance, determination and talent that he was still comfortably in the top ten. If he had more than four weeks to prepare, a podium was certainly not out of the question. Dungey had three months on the new bike and on raw speed Cairoli was on a similar level – if he can get at one with the bike and more fitness I wouldn’t be surprised to see him on the box when it’s all flowing or maybe even an overall win.

Josh Gilbert deserves a lot of credit too, two great rides and most of the US media not having a notion who he was despite Josh at times racing GP’s and even scoring some points alongside his success at British championship level, did create a few smirks amongst the UK fans, but he is on their radar now! It also underlines the sheer amount of talent in Europe and even GB when British championship riders and non-GP regulars can run close to the top ten in the US at their first attempt.

Can we get Jett and Hunter back in world championship for the final few rounds when the Nationals are over? The Lawrence brothers v Tom Vialle, Jago Geerts and the likes of Kay de Wolf would certainly give them more competition that they had at Pala. Those boys were impressive and it’s hard to overstate the achievement of the whole family to move from Australia, race GPs then go 1-2 in a US National and now probably battle for the title. Unbelievable. But Jett v Tom v Jago would be something else, because the pace of the front two in the world championship is electric right now and Jett looks on the level to run that pace too.

Unfortunatelty for Jago Geerts two crashes meant he is now the chaser in the MX2 world championship after Spain, but questions have to be asked just why so much water went down for moto one that caused that huge crash for the Belgian. It could have cost him a world title but thankfully he could get up and remount, climbing back into the top ten. Yes, he crashed while leading race two but, under the circumstances of the first crash and riding stiff and sore, to be on the podium and still within ten points has to be a big positive – but the problem for Jago is Tom Vialle is back to his best, has the new bike sorted and has his home GP next year. Jago’s mental resilience will be tested again in a duel that leaves no room for mistakes with the level so, so high from the pair of them.

Simon Laegenfelder showed he was back to form but Liam Everts also really stood out. He is learning the GP speed quickly, has shown he can come through the field and did it yet again in race one and then finally got a holeshot in race two and showed no intimidated whatsoever. He saw the incredible pace of Jago and Tom then fought tooth and nail with Laegenfelder and Haarup to take fourth. His intensity is higher than ever and he is proving to himself he has what it takes to be up front.

Maxime Renaux is getting better and better. His first double moto win in MXGP was done the hard way, especially in race one to make a pass on Prado and take the pressure from the Spaniard and then Gajser but come away with the win on track that needed 100% concentration. Race two was obviously helped by Prado’s mistake just when it looked like the Spaniard made a break for it and would cruise to the win.

Renaux took advantage and is now the most likely to challenge Tim Gajser who did some good damage limitation again despite not feeling 100%. Prado though has had a tough year and the Spanish GP encapsulated his whole year. Almost there in race one but small mistakes cost him, then when he had the pace on the rest, random crash and dropping back through the field to 11th, losing more points to Gajser when he had the chance to gain some back. Not easy to deal with from a physiological point of view.

On the postive aspect though was Mattia Guadagnini showing his ability on a 450 with sixth overall, calm but effective speed from Ruben Fernandez despite the pressure of his home GP and a pleasing return to for for Valentin Guillod with a top ten, passing Prado right at the end of race two to end his weekend on high. It’s great to see the Swiss rider, a former MX2 GP winner against Herlings don’t forget, show his talent in the premier class.