Osborne on winning, retirement, and Dixon racing helping his career! 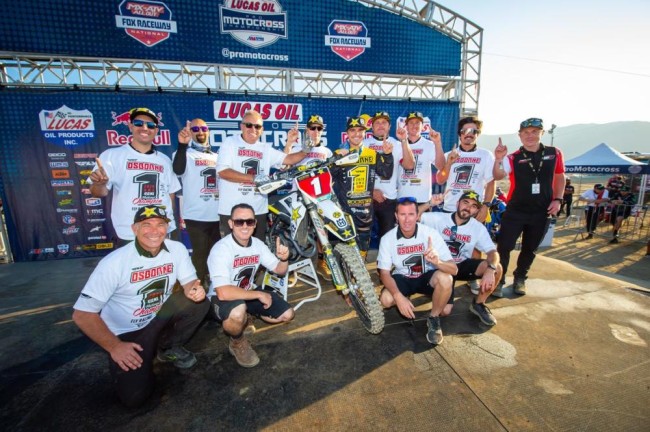 New 450 US motocross champion, Zach Osborne, went into detail during the press conference to explain his thoughts on winning the title, what has helped him get there as well as why he thought about retiring in March

Here is Zach on..

Obviously I had a decent lead coming in, 24 points. So I knew it was mostly about executing two good starts and kind of keeping my bike in tact. The stress was high, but as far as being nervous I felt really, really good about my chances and I knew that I just needed to execute what I have been kind of all season, and it worked out for me today.

I would say the first championship I won obviously in 2017, the supercross championship, was the climax. It’s hard to beat that. But this one is definitely right up there. It’s been a hard-fought season. I’m older than anyone that’s ever done it, which is quite an accomplishment as well. So there’s a lot of things that were kind of stacked against me. It just felt amazing to cross the finish line.

When you’re in that situation and the moto is long… The track was really rocky today. You hear a noise and you think, oh man! Everything you hear and everything you feel is just magnified by fifty. So as far as nerves, it wasn’t that bad but stress was pretty high.

Every experience you can either learn from it or allow it to be a failure or a setback. Today was just kind of the culmination of a lot of years of doing what I do and trying to claw my way back to where I am today. Still, nothing that I’ve ever done really prepared me for the pressure that I would feel today and last night trying to sleep. It’s nice. I’m looking forward to going to bed!

It’s hard to say. I would like to think that it was probably 2016, the year before I won championships. I was really close to winning some supercrosses that year and it really broke me down because I was prepared, my bike was good, everything was in a really good spot. I failed like four or five times that supercross season. I was on the podium. Until that point, podiums were always like, I got on the podium! Finally I just kind of got fed up with that. I wanted to win. I was able to win a race at Budds Creek at the end of that year in 2016. That sort of seemed to flip that switch.

But then when you get in the 450 class it’s the same battle all over again. Last year I won a moto and this year I wanted to win a race. I won the first and then I won the second race, and then I kind of went from wanting to win to, “Hey, maybe we can win this title.” Then seven weeks later I’m still leading the points. It was like a completely different level of pressure and precision that needed to be used every day, training and all the things that happen to get you to race at the final race on the final day of the championship to be able to be in a position to win. That’s the details. That’s kind of what got me to where I am.

Retirement thoughts and if winning the title helps motivation

Massively. That’s the reason why I considered retiring, because at the time I was riding like crap.

I was struggling and I didn’t feel like I could be in contention for wins or being relevant. So to know that I can do it, it’s inspiring to me. As long as I have health, this is the plan for my life and I’ll continue.

It was more just me and my wife, and probably just more me because I was kind of afraid. It was a big decision. It was one of those things where I just needed to take some time and really discover if this was really what I wanted to continue doing. It was a massive injury. I had five broken vertebrae, two that were 50% compression, loss of height, a broken wrist, two punctured lungs, partially punctured and collapsed, bruised lungs. It was a big deal for me.

It wasn’t like a scared thing, it was just I was struggling to get going again and find the motivation. Obviously in the end it was the right decision and I’m grateful for the decision that I made as well as my wife’s influence on not allowing me to quit in a hard time.

How being a family guy helps

The main thing is they are going to love me no matter what, whether I win or I don’t win. Like you said, they’re my main focus. When I have that comfort and knowing that no matter what I have something to go home to, it’s an awesome feeling. My little girl, I asked her when we were going to Loretta’s 1, I was like, “Are you going to watch the race this weekend?” She was like, “Are you going to win this weekend?” [Laughs] I was like, okay. Here we go.

But my little guy, he loves being at the races. It’s been fun getting to watch him this year just kind of enjoy running and playing in the dirt. Yesterday we built a toy bike track and he was so stoked on it. I was probably more stoked on it! It’s those kind of things that you don’t ever realize or appreciate until you become a dad, those moments.

The importance of Steve Dixon and the right team

I don’t believe in my heart of hearts that I would be where I am today without the experiences that I’ve had. It’s not just the racing experiences, either. It’s a lot of life experiences. I had a high-level ride and everything that you could want as a kid as an amateur from the time I was twelve years old until I lost it all and kind of went down a different path. But the rubber had never met the road for me until it was time to do it for me and for myself.

I actually owe a lot of my success to the guys that were on my original team when I went to England, the Dixon Racing Team, because they kind of rekindled the fire for me, a passion that I never really had. It just brought racing to me in a different light, a lot of fun, and that it didn’t have to be so corporate. There was no pressure. We just had a genuinely good time and it’s much the same as the team I’m on now. I think that that’s why when I came back with GEICO it was very corporate and square. They’re an amazing team. They’ve had an amazing career as a team, but it was just too stiff for me.

I needed that fun atmosphere and to feel those feelings again. When I came back with them, I kind of had the same feelings that I had when I left. Then when I came to this team, it was more it can still be fun and racing in America.