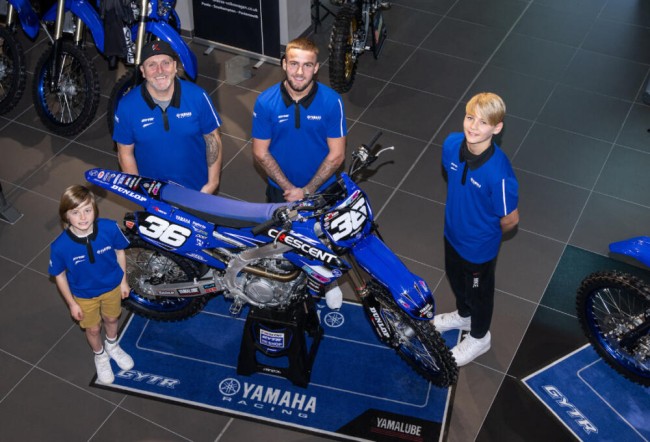 3 Flo Madison Crescent Yamaha was established following a linkup between Perrett and established off-road and on-road Yamaha dealership Crescent Yamaha, which has long been involved in the running of Yamaha Motor UK’s MX efforts, as well as official Yamaha team in the Superbike World Championship.

The new team will field a four rider line-up across the different youth classes, three of whom will compete as part of the 2023 YZ bLU cRU programme. Eight-year-old Tommy Wood will start at the beginning of the team’s development programme, competing on the YZ65 after an impressive year in the Autos. 11-year-old Arthur Moore will step up to the YZ85, while 13-year-old Ollie Bubb will race the YZ125. Wood, Moore and Bubb will all be entered into the YZ65, YZ85 and YZ125 bLU cRU Challenges, competing for their chance to show their mettle at the bLU cRU YZ European SuperFinale later next year. The team will also run 17-year-old Hudson Roper on the YZ250F.

The YZ bLU cRU Challenge is open to anyone racing a YZ65, YZ85 or YZ125 in an approved national championship. Those joining the programme will receive a number of benefits including Paddock Blue clothing and a sticker kit for their bike, support and advice from bLU cRU Ambassador Jeff Perrett, an invitation to an exclusive bLU cRU Training event plus the top performing riders in each category will be invited to the YZ bLU cRU European SuperFinale to compete against the best young riders in Europe and take the next step towards a professional career.

Find out more about the bLU cRU Programme by downloading their dedicated brochure here >> https://www.yamaha-motor.eu/gb/en/information/brochures/2022/2023-uk-blu-cru-yz-cup-brochure/#/

“I’m genuinely excited about the new team and the whole bLU cRU project, especially with the long term goals we have set out. I am made up to be representing Yamaha again after starting my career on a YZ50 back in 1981 and spending a lot of my youth racing years on Yamaha machinery.

“The whole idea of the bLU cRU programme is to take riders all the way from the 65cc class to the pro ranks, and I’m delighted to be able to link up my own team with such an excellent initiative. Our first 65cc rider, Tommy Wood has genuine potential coming off an awesome year in the Autos so we are excited to see what he can do.

“It’s Arthur and Ollie’s first year in their respective classes so it’s a good starting point to work from for both of them with realistic expectations from us all. Hudson is a rider I have worked with for some time, so I’m also excited to see him take the next step towards competing in the professional, adult classes.

“We’re all keen to get started on the proper work ahead of the first championship race of 2023, and I’d like to thank Yamaha Motor UK, Crescent, Madison and all of our team partners in getting the new 3 Flo Madison Crescent Yamaha team up and running. We’ll certainly be giving it our all to make a success of it!”

“We really wanted to take our bLU cRU programme to the next level in the UK next year and appointing Jeff as the UK bLU cRU ambassador seemed a logical step in that process given his history and experience in bringing on young talent. We’re delighted that as well as taking on that role, he’s also entering three promising young riders into the bLU cRU programme himself with the 3 Flo Madison Crescent Yamaha team and we’re all really excited to see how they get on.

“The whole idea of the programme is to offer young riders the opportunity to progress through the junior ranks to become professional racers, so it’s great to have Jeff on board to help us do that alongside the Cab Screens Crescent team as we look to offer even more to the UK participants in 2023. We can’t wait to get started and see where it goes!”